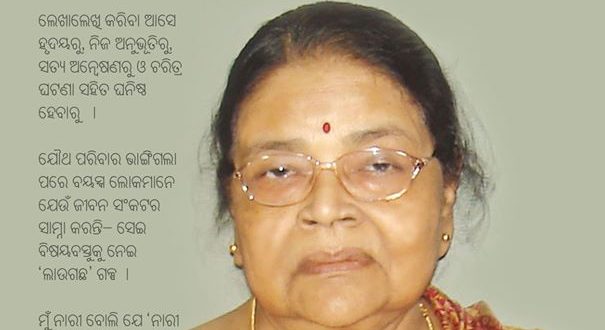 The literary body will also felicitate 15 other littérateurs from the state.

Atibadi Jagannath Das Samman is the most respectable honour to any littérateur by the academy. Started in 1993, the first award was given to Odia poet Radha Mohan Gadnayak. The award is being conferred by Odisha Sahitya Akademi to a language litterateur for lifetime contribution to Odia literature.

Binapani Mohanty is an eminent literary figure of Odisha. Her literary career as a story-teller began with the publication of ‘Gotie Ratira Kahani’ in 1960.

Some of her best-known stories are Pata Dei, Khela Ghara, Naiku Rasta, Bastraharana, Andhakarara, Kasturi Murga O Sabuja Aranya and Michhi Michhika. It was the collection of short stories entitled ‘Pata Dei and other Stories’, that won the 1990 Sahitya Akademi.

Pata Dei was published  in 1986. In 1987, its Hindi dramatisation was telecast in Doordarshan’s Kashmakash programme winning accolades and appreciation from all parts of India.Binapani Mohanty short story BHANGA SILATA is adopat in Odia film which was  directed by Prafulla Mohanty

Many short stories of Binapani Mohanty have been translated into different languages such as English, Hindi, Kannada, Malayalam, Marathi, Bengali, Urdu, Telegu and Russian.

She has also penned three novels: Sitara Sonita, Manaswini and Kunti, Kuntala, Shakuntala and a one-act play entitled Kranti. She has translated Russian folk-tales from English to Odia, among other translations.