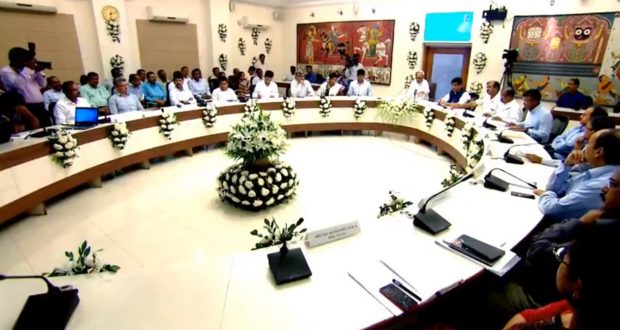 Odisha Government’ s 22 Departments is being inducted in Mo Sarkar

in State News March 2, 2020 Comments Off on Odisha Government’ s 22 Departments is being inducted in Mo Sarkar 530 Views

Launching the inclusion of these five departments in Mo Sarkar, Chief Minister Naveen Patnaik called upon the officers to respect the will of the people. Speaking on the occasion, he said, “People are the life force of a democratic system. The government is a reflection of the will of people which is constituted to meet their aspirations. It is, therefore, imperative that public servants must uphold the dignity of the people whom they are supposed to serve and respect their will. Service to the people is not merely a slogan but has to be a culture that each government servant must imbibe and display at all times.

Upholding the self-respect and dignity of our people will help every public servant earn their respect and make governance people-friendly. The objective of all the Departments must be to ensure that every citizen, coming to the office for any reason, leaves with satisfaction. .He must feel that his visit was purposeful, he received due respect and he develops a conviction that the entire government machinery is working for the benefit of people like him.

I believe all of you have got the message very clearly. As public servants, you have a responsibility to ensure that every citizen of my State speaks from his heart that it’s truly Mo Sarkar.”

All the five Ministers of the departments that were included also spoke on the occasion. Handloom & Textiles Minister Smt. Padmini Dian said that Mo Sarkar will benefit the weavers and artisans immensely. The officers of her department will be activated under Mo Sarkar.

Water Resources Minister Raghunandan Das said facilitation centres have been opened in all the offices of WR Deptt. His department is fully prepared for Mo Sarkar.

Fisheries & ARD Minister Arun Sahoo said that the massive training programme has been conducted for the orientation of the employees to provide professional service to the people with dignity.

Cooperation Minister Ranendra Pratap Swain said that his department is absolutely ready to provide professional services under Mo Sarkar. Help desks have been set up at different offices of the Cooperation Department to assist the people.

In his welcome address, Chief Secretary Asit Tripathy said that the Mo Sarkar regime will transform the process of governance and will empower the people of Odisha.

Five-T Secretary V.K. Pandian interacted with various officials of the five departments from districts like Keonjhar, Jagatsinghpur, Boudh, Bolangir, and Nawarangpur. Expressing satisfaction over the awareness of officers and employees on Mo Sarkar, he said that the WR Deptt. is under the complete watch of the Government. Development Commissioner Suresh Chandra Mohapatra offered a vote of thanks.

2020-03-02
Editor in chief
Previous: Odisha government is committed to the overall development and welfare of construction workers:Naveen Patnaik
Next: Sanjay Kumar Das Burma took charge as the deputy chairman of the Odisha State Planning Board