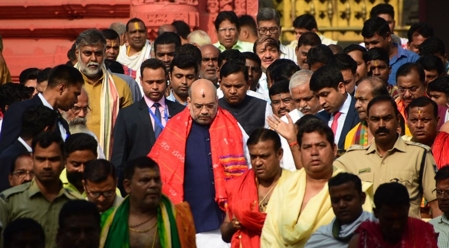 Shah, on a two-day visit to Odisha, visited the 12th-century shrine on the second day of his tour amidst tight security and sought blessings from the trinity – Lord Balabhadra, Devi Subhadra and Lord Jagannath.

During his 30-minute stay in the temple premises, Shah had darshan near the sanctum sanctorum and lighted lamp (deep) while paying obeisance to the presiding deities, said the temple priests.

Besides offering prayer inside the main shrine, the home minister also went around the premises and visited the temples of Devi Vimla and Mahalaxmi, said Shah’s family priest Raghunath Gochhikar.

Though Shah has visited Shri Jagannath Temple several times, this was his first visit to the shrine after becoming a central minister, he said.

Shah was accompanied by the three Union ministers, BJP MP from Bhubaneswar, Aparajita Sarangi, and party’s state president during his visit to the Lingaraj temple.

The home minister spent around 20 minutes in the temple premises and offered a special puja.

“Amit ji had a good darshan of Lord Lingaraj,” the Bhubaneswar MP said.

On Friday, Shah chaired a meeting of the Eastern Zonal Council here, which was attended by chief ministers of Odisha, West Bengal and Bihar.

After the meet, he addressed a rally on CAA, organised by the BJP, at Janata Maidan here.

2020-02-29
Editor in chief
Previous: The Minister launches “Do You Know” Twitter Series on Family Pension
Next: Pramod Kumar Meherda has been appointed as Commissioner-cum-Secretary to Governor of Odisha.