Top Headlines
Home » Business » With Japan as Partner Country, we will make Odisha the Nerve Centre of Purvodaya in Steel Sector :Dharmendra Pradhan 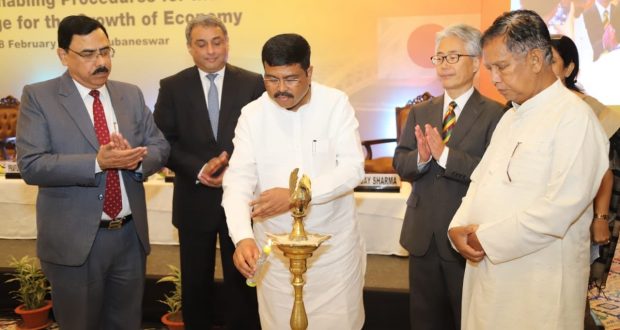 With Japan as Partner Country, we will make Odisha the Nerve Centre of Purvodaya in Steel Sector :Dharmendra Pradhan

Bhubaneswar:28/2/20:Union Minister of   Steel and Petroleum & Natural Gas Shri Dharmendra Pradhan participated in the workshop on “Enabling Procedures for Increase of Steel Usage for the Growth of Economy” at Bhubaneswar today. This workshop was organised by Ministry of Steel in partnership with Ministry of Economy, Trade and Industry (METI) Government of Japan and Confederation of Indian Industries (CII).

Speaking on the occasion, Shri Pradhan said that with Japan as the partner country, he is looking forward to make Odisha, the nerve centre of Purvodaya in Steel sector. Prime Minister Shri Narendra Modi has given a clarion call for Mission Purvodaya, that is Eastern India driving the national growth and propelling India towards becoming a $5 trillion economy. 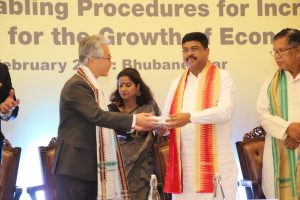 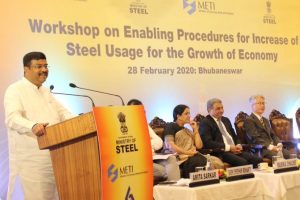 Speaking about this initiative the minister said, “We are organising series of workshops to deliberate on how to increase steel usage in India. We have rightly chosen Japan as our partner country who will guide us for making Indian steel ecosystem bigger both in qualitative and quantitative terms.” Talking about Japan-Odisha connection, he said, “Japan and Odisha has age old association. The iconic Dhauli Stupa built with Japanese support is a link between the two civilisations. Today after few decades, we have again gathered here to rewrite history and write a new chapter in growth of steel sector in Odisha with Japanese collaboration.”

Referring to eastern India, Shri Pradhan said that the society of eastern India is aspirational– people are getting economically sound, their spending capacity is increasing. He further stated that eastern India will play a pivotal role in driving national economic growth and achieving PM Modi’s vision of making India a $5 trillion economy.”

Speaking about Odisha, the minister said, “Today, $5 billion infrastructure spending is being done only in Odisha in developing railways, roads, airports, pipelines, bridges etc. We have achieved 100% electrification in Odisha. 8 Cr new LPG connections have been given to the poorest of the poor. We have an ambitious plan to build next generation infra and boost economic growth.”

Highlighting the prospects of steel sector in Odisha, he said, “Today Odisha is the highest steel producing state in the country.  We are working to strengthen the steel ecosystem in Odisha. By 2030, Odisha’s steel production alone is set to cross 100 MTPA. Odisha is going to be the nerve centre of Mission Purvodaya in steel”. Shri Pradhan also informed that Kalinganagar will be the hub of the clusterization program involving entire eastern India. “Moving beyond just producing primary steel, we will create an ecosystem of ancilliary, value added products, capital goods with industry participation,” he added.

Speaking on the occasion H.E. Ambassador of Japan to India Mr. Satoshi Suzuki, said, “India is moving towards becoming a $5 trillion economy and it is the right time to share our experience with India. Japanese companies are increasingly collaborating with Indian companies. I am pleased to note that Japan and India have launched India Japan Steel Dialogue to ensure sustainable growth of steel sector. Demand for steel in India is set to grow.”

2020-02-28
Editor in chief
Previous: As per the vision of PM Narendra Modi, the Eastern region needs more focus to fast track its development: Amit Shah
Next: Citizenship Amendment Act does not intend to strip anyone’s Citizenship