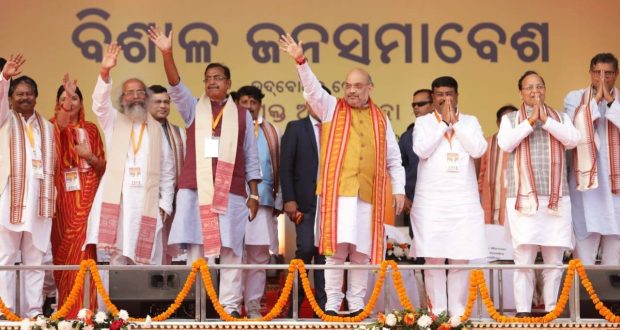 Citizenship Amendment Act does not intend to strip anyone’s Citizenship

in Politics February 28, 2020 Comments Off on Citizenship Amendment Act does not intend to strip anyone’s Citizenship 681 Views

Bhubaneswar: 28/2/20: The Citizenship Amendment Act (CAA) does not intend to strip anyone’s Citizenship. The CAA is a law to give citizenship. Union Home Minister Amit Shah said on Friday while addressing his first pro-CAA rally here in the aftermath of Delhi violence.

Opposition parties are instigating and misleading people on the controversial CAA, the Union Minister said while addressing a massive Jan Samavesh organized by the Bharatiya Janata Party to spread awareness regarding CAA.

The former BJP national president blamed opposition Congress, BSP, SP, Trinamool Congress and CPI for spreading rumour for political gain claiming that the rights of Muslims in the country will be affected by the CAA.

“All the claims against CAA are false and baseless. CAA is not about taking away citizenship rather it is to grant citizenship,” he added.

The law only intends to help those who have faced religious persecution in the neighbouring countries, he concluded.

2020-02-28
Editor in chief
Previous: With Japan as Partner Country, we will make Odisha the Nerve Centre of Purvodaya in Steel Sector :Dharmendra Pradhan
Next: Prof. Suryamani Behera conferred with the prestigious National Award for Outstanding Efforts in Science & Technology Communication