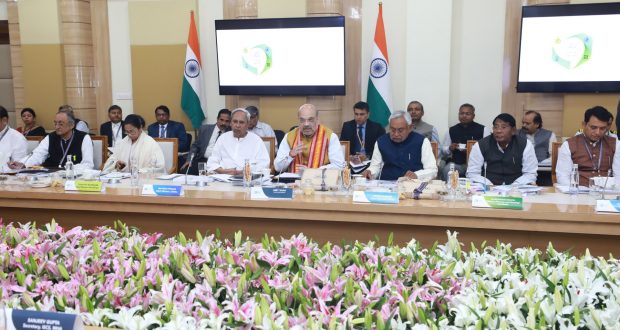 As per the vision of PM Narendra Modi, the Eastern region needs more focus to fast track its development: Amit Shah

in National February 28, 2020 Comments Off on As per the vision of PM Narendra Modi, the Eastern region needs more focus to fast track its development: Amit Shah 554 Views

Addressing the meeting, Shri Shah welcomed all the members of the Council to the 24th meeting and hoped that this would be a fruitful meeting where all the issues having Centre-State and inter-State ramifications will be resolved with consensus. He stressed that  according to Prime Minister Shri Narendra Modi’s vision, after due deliberations, decisions taken by consensus should be implemented to further strengthen the federal structure of the country. The Home Minister also expressed his satisfaction at usefulness of Zonal Council mechanism and informed that more than 70% issues have been resolved based on the recent meetings of the Zonal Councils and remaining issues are also under resolution.

The Council also discussed the issues related Phulbari Dam under the agreement of 1978 signed by the States of Bihar and West Bengal on Upper Mahananda Water Scheme, Extension of Nuapada-Gunupur-Therubali Rail Link Project in northern districts of Odisha, Determination of Pension liability between Bihar and Jharkhand, Use of State Government land by Coal companies of GOI, Pradhan Mantri Awas Yojana (PMAY) – land transfer by CPSU, Speedy investigation of cases of sexual offence/rape against women and children. Prevention of cattle smuggling/illegal transportation of cattle to the Indo-Bangladesh  Border, Lack of telecom and bank connectivity in Odisha, Illegal cultivation and trading of hemp / cannabis in the State   of Odisha, Revision of royalty on Coal, Inadequate funding and delayed Land related issues of Petroleum projects etc. Out of the 48 items discussed today, 40 were resolved in the meeting.

As per the vision of Prime Minister Shri Narendra Modi, the Home Minister stated that Eastern region needs more focus to fast track its development.  He hoped that today’s meeting would be decisive and fruitful in resolving the issues listed in the agenda.  He stated that besides the issues listed in the agenda, he would also like to add and discuss issues relating to law & order and administrative reforms so that this Council meeting is helpful in giving further pace to the development of the country.

2020-02-28
Editor in chief
Previous: IIT BHUBANESWAR CELEBRATES NATIONAL SCIENCE DAY WITH ZEAL
Next: With Japan as Partner Country, we will make Odisha the Nerve Centre of Purvodaya in Steel Sector :Dharmendra Pradhan