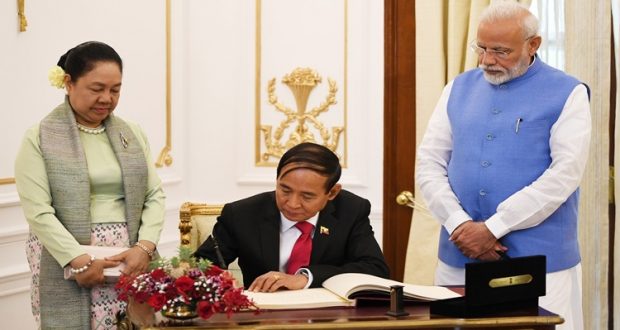 in International February 27, 2020 Comments Off on India and Myanmar to further strengthen bilateral relations 578 Views

Newdelhi:27/2/20;India and Myanmar have agreed to further strengthen the bilateral relations. Both sides today signed 10 agreements in various fields including infrastructure, energy, communication and health. The agreements were exchanged following talks between Prime Minister Narendra Modi and Myanmar President U Win Myint in New Delhi. Both leaders discussed a wide range of bilateral issues.

Mr U Win Myint arrived in New Delhi yesterday on a four-day visit to India. He is accompanied by the First Lady Daw Cho Cho. Myanmar President was accorded ceremonial reception at the Rashtrapati Bhavan this morning. He visited Rajghat and paid tribute to Father of the Nation Mahatma Gandhi. External Affairs Minister Dr S Jaishankar also called on the visiting dignitary.

A  joint statement released this evening said, the visit reinforced the tradition of high level interactions, symbolizing the strong friendly relations existing between the two neighbours.

Co-operation in defence and security along with matter of enhanced bilateral trade and economic engagements was also discussed. India reiterated its support for peace , stability and development in Rakhine state. Coordinated Bus Service between Imphal and Mandalay is expected to begin from April this year. The Indian side reiterated its commitment for construction of the Integrated Check Post in Tamu, Myanmar. With Anupam

2020-02-27
Editor in chief
Previous: Naveen Patnaik was declared elected as BJD president for the 8th consecutive term
Next: New Zealand congratulates India on the impressive strides made in Ease of Doing Business