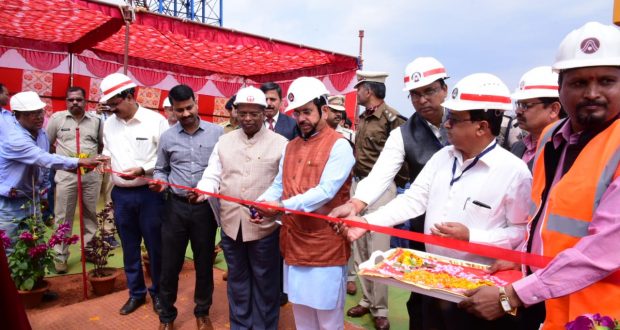 Damanjodi:25/2/20 Union Minister of Coal and Mines, Shri Pralhad Joshi laid foundation stone of Crusher and Conveyor System at NALCO’s Mining & Refinery (M&R) Complex in Damanjodi, Odisha today. The System will cater to feed bauxite for the 5th stream of Alumina Refinery of the company. The project is expected to be completed by April, 2022 and would cost around Rs. 483 crores.

“We as a country aim to reach a $5 trillion economy by 2024 and I am sure NALCO will be a success story in this growth trajectory.” Union Minister of Coal and Mines said while interacting with employees of NALCO at M&R Complex in Damanjodi after laying the foundation stone.

Referring that Odisha has about 51% of bauxite, 25% of coal and 34% of iron ore resources of the country apart from 96% of Chromite and 44% of Manganese resources, Shri Pralhad Joshi said “Our Govt. has taken a number of steps to unlock the mining potential of mineral rich States for the benefit of the country as well as the population residing in these areas.” He also appreciated the State Government for supporting mining activities in the region and highlighted that it will help in boosting the economy and bringing development to the State.

Earlier on Monday, Shri Joshi had chaired a review meeting of NALCO at Visakhapatnam and directed the senior officials of the company to ramp up production to achieve annual target with paying due attention to safety. He expressed his happiness over NALCO becoming the world’s cheapest producer of Bauxite & Alumina for the 4th consecutive year. He also praised NALCO for achieving capacity utilisation in the midst of challenges arising out of operating in a remote location. 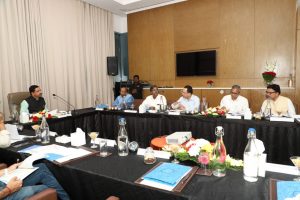 Union Minister of Coal and Mines also visited Panchpatmali bauxite mine located in the Koraput district, the largest bauxite mine in Asia, having a bauxite deposit of approx. 310 million tonnes.

National Aluminium Company Limited (NALCO) is a Navratna CPSE under the Ministry of Mines, Govt. of India. with its headquarters at Bhubaneswar, Odisha. The Company is one of the largest integrated Bauxite-Alumina-Aluminium- Power Complex in Asia. The company is listed on Bombay Stock Exchange and National Stock Exchange. The Alumina Refinery provides alumina to the company’s smelter at Angul and exports the balance alumina to overseas markets through Visakhapatnam Port. The present normative capacity of Alumina Refinery is 21 lakh MT per annum through 4 nos. of independent streams. The Refinery receives bauxite from its own captive Panchpatmali Bauxite Mines of Eastern Ghats located 16 kms away through a special type of conveyor belt called Cable Belt. Coal is received from Mahanadi Coalfields Limited; Caustic Soda Lye is received through their Port Facilities and water from upstream of Kolab Reservoir which is located in the Koraput District.

2020-02-25
Editor in chief
Previous: Dharmendra Pradhan describes the INDIA-US Summit meeting as a momentous occasion for the bilateral relations
Next: US President Donald Trump says, both countries committed to protecting their people from radical Islamic terrorism