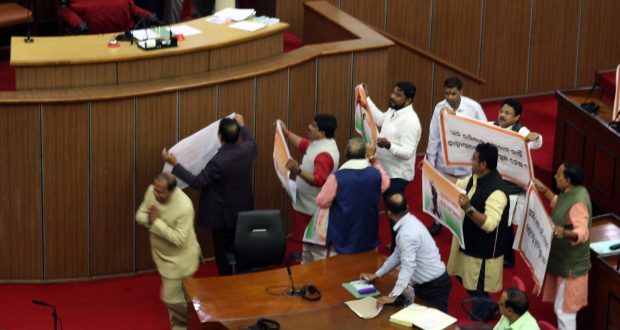 Odisha Assembly was in turmoil over paddy procurement

in State News February 25, 2020 Comments Off on Odisha Assembly was in turmoil over paddy procurement 585 Views

Bhubaneswar:25/2/20: The Odisha Assembly was in turmoil over paddy procurement on Tuesday with BJP alleging the government was buying paddy from agents instead of farmers.

The House proceedings came to a halt as both the opposition Congress and the BJP rushed to the well shouted slogans and showing placards. Speaker S N Patro adjourned the House twice on the day.

Leader of Opposition PK Nayak said mismanagement in paddy procurement this time was due to the introduction of the token system.

The Congress Legislature Party Leader Narasingha Mishra said farmers are being exploited as the government joined hands with the millers. He expressed his concern over the non-procurement of paddy from the farmers.

While BJP MLA Bishnu Sethi said the objective of the token system has failed, Tara Prasad Bahinipati (Congress) demanded to raise the limit for paddy procurement in non-irrigated areas.

2020-02-25
Editor in chief
Previous: Naveen Patnaik will be re-elected as the next President of Biju Janata Dal
Next: V Karthikeya Pandian will also serve as Secretary to the Chief Minister’s Transformation and Initiatives