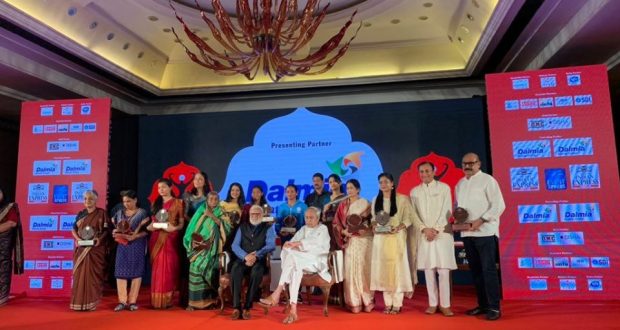 BHUBANESWAR:24/2/20: Do not refer to women as the weaker sex’. That’s what the legendary writer Pratibha Ray, urged the society after receiving the prestigious Devi Awards, instituted by The New Indian Express Group (TNIE), at a gala ceremony in Bhubaneswar on Sunday.

“Often, people use the word ‘abala’ (helpless) to describe women. It’s wrong. Do not use such adjectives for them. We worship the ‘Vedas’, isn’t it? But, in the ‘Vedas’, there is no mention of the word ‘abala’ for women. Instead, they are referred to as ‘dhwaja’ (flags) of the human society. They are the incarnations of Shakti. There’s a Devi residing in the soul of each woman,” she said.

Breaking stereotypes and defeating gender-bias at several levels in the society, 12 such ‘Devis’ from across the State turned the spotlight on the indomitable spirit of womanhood along with TNIE – a group that has relentlessly sustained its efforts towards development of women in the country over the years.

On Sunday, these trailblazers glittered like stars while being felicitated by Chief Minister Naveen Patnaik with the Devi Awards at the Mayfair Hotel. Standing with their heads held high and sharing their success stories with panache, they inspired the house packed with people of different age groups. Here is the name those who conferred with ‘Devis’ award

70-year-old Sashi Pradhan of Dengajhari in Nayagarh district  heads the Community Forest Protection Committee and has been instrumental in protecting the forest and water resources in the area. She initiated the idea of Thengapali or forest patrolling in the village and has been guarding the forest for the last four decades. When timber mafia began stealing wood from the forest 40 years back, she formed a group of villagers to guard the forest round the clock. The group included her besides, people of Dengajhari and other villages.

Dutee Chand: Role model in the field of sport
A sprinter and current national champion in the women’s 100 metres event, 23-year-old Dutee is the third Indian woman to ever qualify for the Women’s 100 metres at the Summer Olympics. She is also India’s first athlete to openly come out as a member of the LGBTQ+ community in 2019. Dutee did not bow down to the criticism that followed, both by her family and public. Months later, the sprinter emerged as the first Indian woman track and field athlete to win gold medal in the 100m dash event at World Universiade in Napoli.

Born and raised in the US, Sonali Mishra works to popularise Odissi dance. Her commitment to artistic excellence, combined with her dedication to cultivating intellectual discourse in the field of Odissi, have carved a niche for her in the field of dance. She holds a masters in Public Policy and Management from Carnegie Mellon University’s H John Heinz III School of Public Policy and Management. Her primary areas of research are international cultural policy and the role of culture in urban and regional economic development.

One of the earliest writers to reimagine Draupadi in Yajnaseni, the legendary Pratibha Ray is known for her bold approach to writing. A household name in Odisha, she carved a niche for herself with works like Yajnaseni where Draupadi was reconceived. Her first novel Barsha Basanta Baisakha (1974) was a best seller. A recipient of the prestigious Jnanpith Award and Sahitya Akademi Award, Ray’s search for a social order based on equality, love, peace and integration continues, since she first penned at the age of nine. Besides her legacy in literature, Ray made her mark as a devoted academician and is remembered for her commendable work with the Bonda tribe. Defining her brand of feminism as ‘humanism’, Ray believes every woman has the force of a goddess.

Through her persistent and painstaking efforts, Vidhya Das has given a voice to several marginalised tribal women of the state to fight for their rights and work towards economic independence. Founder of Agragamee, and the popular tribal women’s collective, AmaSangathan, she has spent more than three decades in Rayagada district, changing lives of tribals there. Her untiring efforts in the field of tribal development through policy advocacy, natural resource management and education have led to a sea-change in the socio-economic condition of tribals. She is also known for pioneering the anti-alcohol movement in 12 districts of the State.

Sita Behera: Passion against all odds

Poverty could not deter her spirit from pursuing goals. Today, she has several firsts to her credit. Fighting against many odds, 24-year-old Sita Behera is the first woman from her village Soran in Khurda district to have become a junior technician and secure a government job at Odisha Power Transmission Corporation Limited. A student of ITI Berhampur, she is also the first from her village to go to an ITI. Hailed as the ‘Queen of the Transmission Towers’ by the Odisha Skill Development Authority, she effortlessly climbs up electricity towers to ensure villages in Khurda district stay lit.

Her innovation in eco-tourism gave Odisha its first eco-village, which is not only promoting sustainable living but also bringing a positive change in the landscape that earlier saw poverty-driven poaching. An Odisha Forest Service officer with an excellent track record for conservation work in Satkosia Tiger Reserve, Anshu Pragyan Das has proven herself by initiating innovative eco-tourism opportunities. As the Divisional Forest Officer of Mahanadi Wildlife Division, she was instrumental in creating the State’s first eco-village and canopy walkway at Muduliguda in Nayagarh district. The village not only promotes plastic-free environment but is also open defecation free.

And the villagers who were earlier selling forest produce for livelihood are now managing the eco-tourism property.Her innovation in eco-tourism gave Odisha its first eco-village, which is not only promoting sustainable living but also bringing a positive change in the landscape that earlier saw poverty-driven poaching.

An Odisha Forest Service officer with an excellent track record for conservation work in Satkosia Tiger Reserve, Anshu Pragyan Das has proven herself by initiating innovative eco-tourism opportunities. As the Divisional Forest Officer of Mahanadi Wildlife Division, she was instrumental in creating the State’s first eco-village and canopy walkway at Muduliguda in Nayagarh district. The village not only promotes plastic-free environment but is also open defecation free. And the villagers who were earlier selling forest produce for livelihood are now managing the eco-tourism property.

A tireless crusader for the differently-abled, Sruti Mohapatra’s contribution towards inclusiveness for PWDs in the State and their socio-economic development is unparalleled. Despite being wheel chair-bound since 1987, Sruti nurtured dreams of making a difference in the lives of the differently-abled through advocacy, networking, inclusive education and information dissemination. She set up Swabhiman in Bhubaneswar in 2001. Sruti also fought a long battle to set up ramps in public places and the Secretariat in Bhubaneswar.

Daughter of a municipality driver father who died when she was just eight, and a mother who did odd jobs to maintain the family, Subhalaxmi Subudhi was always interested in baking and confectionery. And despite livelihood issues, she was determined to develop her skills in bakery for which, she enrolled in a college to pursue career as a pastry chef. At the Skilled in Odisha-2018 competition, she won a gold medal in bakery and in the Indian Skills Competition, she bagged a  bronze for her home state and was hired by The Leela Palace, Bengaluru.

Physician-turned-public health researcher Dr Sanghamitra Pati led the first ever study on multimorbidity in India. Director of Regional Medical Research Centre, her most recent research focuses on chronic diseases prevention, management and health promotion in primary care. Being the first in the country to gauge the impact of co-occurrence of two or more chronic health conditions, her commitment to improving the state of primary healthcare infrastructure has been established by her international fellowships.

The 22-year-old tribal girl from Bandudi village of Kandhamal district, Jhulima Mallick has been tirelessly working for ending child marriages in the district. Working with NGOs SWATI and Save the Children, Jhulima has stopped at least 12 child marriages in Kandhamal in the last two years for which, she was awarded the prestigious UNICEF-sponsored V Award. She was also acknowledged for promoting education among girls in her area through her work.

Her name is synonymous with infertility treatment in the state. An established general gynaecologist and obstetrician and an IVF specialist, Dr Sujata Kar played a pivotal role in setting up the first IVF centre in Odisha. Running a full-fledged Assisted Reproduction Unit in Bhubaneswar for the last 18 years, Dr Kar has done over 10,000 cases of advanced gynaecologic endoscopic surgery and assisted reproduction. Credited with the first IVF baby of  Odisha, she also assisted in the first laser hatching pregnancy and live birth.