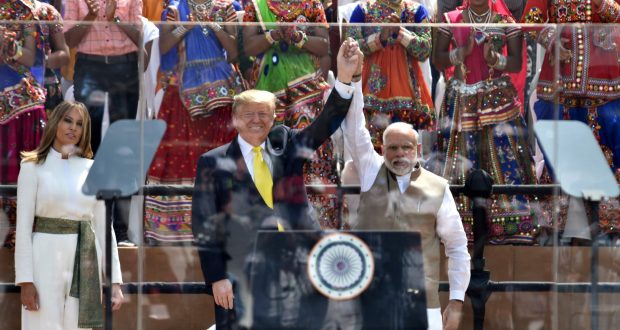 in National February 24, 2020 Comments Off on Prime Minister Narendra Modi and US President Donald Trump address over one lakh people at Namaste Trump event 737 Views

Gujarat:24/2/20:Prime Minister Narendra Modi and President Trump addressed a gathering of more than one lakh people at the Sardar Patel Stadium in Motera at the Namaste Trump event. Both leaders highlighted the shared values and traditions between India and the USA and the future of the bilateral relationship.

Prime Minister Narendra Modi delivered the welcome address first and emphasized the democratic traditions of the two nations as the basis for the strong relationship. He also referred to his close friendship with President Trump and the cooperation between the two countries in various fields.

President Trump made an attempt to connect with the Indian people on a personal level during his speech. He quoted Swami Vivekananda and paid tributes to Indian icons including Mahatma Gandhi and Sardar Vallabhai Patel. He even referred to aspects of Indian popular culture including Cricket and bollywood, which was very well received by the audience.

The event took place after a 22-kilometre long India Roadshow through the streets of Ahmedabad and a visit to Sabarmati Ashram. While writing his comments in the visitor’s book at the Ashram, President Trump called Prime Minister Modi as his great friend and thanked him for the wonderful visit.

2020-02-24
Editor in chief
Previous: 17th edition of BYOFF will be held on February 21st to 25th on Puri beach
Next: India is one of the most attractive global investment destinations in the steel sector:Dharmendra Pradhan