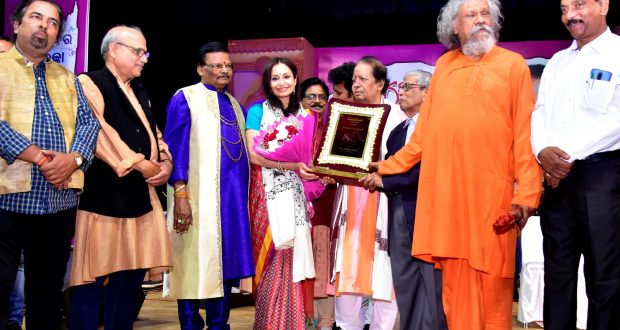 Shallu Jindal gets with Urvashee Award for Art & Music

in Entertainment February 17, 2020 Comments Off on Shallu Jindal gets with Urvashee Award for Art & Music 1,063 Views

Receiving the award Smt. Jindal expressed her deep gratitude to Prafulla Kar Foundation and people of Odisha for the honour. “Dance and art are my soul. I make all effort to promote rich culture of Indian dance and music, wherever possible. Receiving the award from legends and Padma Awardee  winners is proud moment for me,” she said. “Odisha is the land where every stone has a tale to tell and every sound of music has divinity imbibed with it. I aspire to contribute more to the art, culture and quality of life of the People of Odisha,” she further added.

Smt. Jindal was drawn to the dance from her early days and was initiated into Kuchipudi by her Gurus, Padma Bhushan RajaRadha and Kaushalya Reddy. She is taking steps to popularize Kuchipudi in other parts of India. Her grace, beauty and riveting performances nationally & internationally over the years have held audiences spellbound. She has opened the Jindal Art Institute in New Delhi with the aim of spreading far and wide the rich artistic heritage of India and the world with the masses.

Besides, Smt. Shallu Jindal is a noted Social Contributor and the Chairperson of JSPL Foundation. She is the former Chairperson of National Bal Bhawan under Ministry of HRD, GOI and the Founder President of Young FICCI Ladies Organisation (YFLO). She leads JSPL Foundation’s inclusive health, education and other quality of life programme that has reached more than two million families across four state of India. She has also authored a book for children titled ‘India: an Alphabet Ride’.

Smt. Jindal is the Vice President of Flag Foundation of India, which is pioneering in promoting patriotism and reinforcing pride in our National Flag, the Tiranga.

She has been honoured by various her outstanding achievements in the field of Indian classical dance (Kuchipudi) and contribution in the field of art and culture, education and community development. Some of the awards are Women Achiever Award, Rajeev Gandhi Excellence Awards and Indira Priyadarshini Award, CMO Asia’s Best Social Entrepreneur Award in Singapore, Mahatma Gandhi Award for Best CSR Leadership Award by CSR Liveweek USA and recently the Golden Peacock Award for Social Cultural leadership at London.