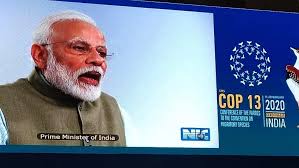 in National February 17, 2020 Comments Off on Prime Minister inaugurates 13th Conference of Parties on Conservation of Migratory Species of Wild Animals 515 Views

Speaking on the occasion, the Prime Minister asserted that India is one of the most diverse countries of the world. He added that with 2.4% of the world’s land area, India contributes about 8% of the known global biodiversity. The Prime Minister stressed that for ages, conservation of wildlife and habitats has been part of the cultural ethos of India, which encourages compassion and co-existence. “Inspired by Gandhi ji, the ethos of non violence and protection of animals and nature have been suitably enshrined in the Constitution of India and is reflected in several laws & legislations,” he added.

The Prime Minister spoke of the increase in India’s forest cover, which currently stands at 21.67% of the total geographical area of the country. He mentioned how India has been championing the cause of “climate action” through conservation, sustainable lifestyle and green development model. In this context, he mentioned the push towards Electric Vehicles, Smart Cities, and Conservation of Water. He said India is one of the few countries whose actions are compliant with the Paris Agreement goal of keeping rise in temperature to below 2 degree Celsius.

The Prime Minister explained how focussed species conservation programmes have shown encouraging results. “India has achieved its target of doubling the number of tigers from 1411 in 2010 to 2967, two years before the committed date of 2022,” he observed. He called upon Tiger Range Countries present at the Conference, and also others, to come together to strengthen tiger conservation through sharing of benchmarking practices. He spoke of initiatives taken by India for conservation of Asian elephants. He also spoke at length of efforts to protect the Snow Leopard, the Asiatic Lion, the one-horned rhinoceros, and the Great Indian Bustard. He also noted that the mascot ‘GIBI – The Great’, is a tribute to the Great Indian Bustard.

He also observed that the CMS COP 13 Logo is inspired by the traditional ‘KOLAM’ from southern India, which has a profound significance in the context of living in harmony with nature. He said the mantra of “Athithi Devo Bhava”, has been reflected in the theme for the CMS COP 13: “Migratory species connect the planet and together we welcome them home.”

The Prime Minister elaborated on some of India’s priority areas, while holding the Presidency of this convention for the coming three years.

The Prime Minister said India proposes to strengthen its association with the ASEAN and East Asia Summit countries.  This would be in sync with the Indo Pacific Ocean Initiative (IPOI), wherein India will be playing a leadership role, he added. India by 2020, will be launching its Marine Turtle Policy and Marine Stranding Management Policy, the Prime Minister asserted. He said this will also address the pollution caused by microplastics. Single use plastics have been a challenge for environment protection and we in India have been on a mission mode to reduce its usage, the Prime Minister said.

Mentioning that several Protected Areas in India share common boundaries with the Protected Areas of neighbouring countries, the Prime Minister said that cooperation in conservation of wildlife through establishment of ‘Trans boundary Protected Areas’, would lead to very positive outcomes.

Reiterating the Union Government’s commitment to the path of sustainable development, the Prime Minister mentioned the release of the Linear Infrastructure Policy Guidelines to tailor development in ecologically fragile areas.

The Prime Minister explained how, in the spirit of “Sabka Saath, Sabka Vikaas, Sabka Vishwaas”, millions of people living in vicinity of forest area in the country have now been integrated in the form of Joint Forestry Management Committees and Eco Development Committees and associated with the protection of forest and wildlife.