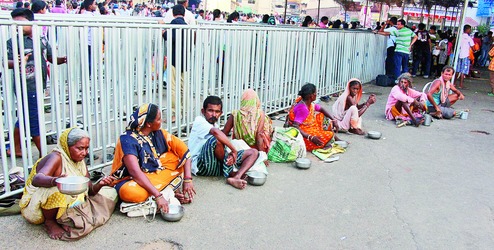 Cuttack district has the highest number of beggars in Odisha

Bhubaneswar: 15/2/20:Odisha government so far has identified as 5950 beggars in the state, informed Social Security and Empowerment of Persons with Disabilities minister, Ashok Chandra Panda in the state assembly.

As per official statistics, Cuttack district has the highest number of beggars with 1060 followed by Ganjam and Mayurbhanj which have 545 and 485 beggars respectively. Similarly, Deogarh has only 3 beggars, the lowest in the state.

Replying to the question of MLA Souvic Biswal in the assembly, the minister said that the government has introduced a scheme called ‘Sahaya’ to rehabilitate and to provide self-employment to the beggars in the state.

2020-02-15
Editor in chief
Previous: Odisha enter quarter-finals after draw with Jharkhand
Next: Opposition stalled the Odisha assembly :Speaker was forced to adjourn the House till 11.30am