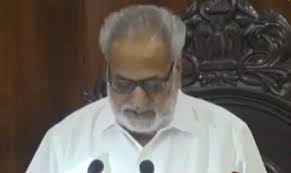 Bhubaneswar, Feb 14: Governor Professor Ganeshi Lal today said that the state government is firmly committed to develop all regions of the state and empower all section of the people.

This was stated by the Governor while delivering the customary annual address to the state Assembly.

The Budget session of the state Assembly began with the Governor’s address.

However, the Congress MLAs boycotted the Governor’s address. But, the Governor continued to read out the 48 page printed speech written in English.

The Governor was accorded guard of honour by the state police and he was conducted to the House to deliver his speech.

The Governor said, “My government will continue to prioritise the creation and development of key and basic infrastructure including connectivity, provision of safe drinking water, power supply, supporting agriculture with irrigation and other facilities and taking health care and education to the next level”.

The Governor said citizen centric governance is the Mo Sarkar initiative of his government which is driven by the force of five touch stones – technology, transparency, teamwork, time and transformation that have now become the moving spirit of governance.

Stating that real transformation cannot take place without greater participation of the people in the process of governance, professor Lal said the government’s new initiative like ‘5T’ and ‘Mo Sarkar’ are formulated and rigorously being implemented.