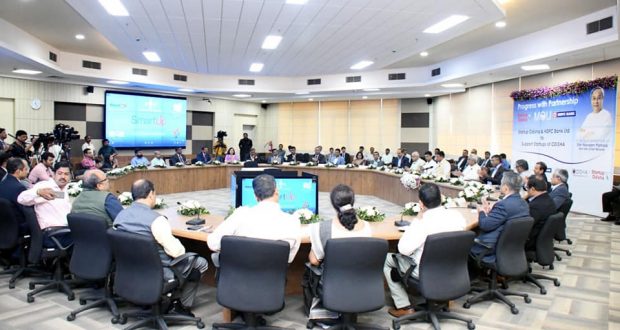 Bhubaneswar:12/2/20: The Block Office is the pivot of administration in rural areas. Mo Sarkar will be a game-changer for 83 percent of Sate’s population who are staying in rural areas, said Chief Minister Naveen Patnaik today at a function for the inclusion of Panchayati Raj & Drinking Water Department under Mo Sarkar at Loka Seva Bhawan.

Welcoming the addition of the Department under Mo Sarkar initiative, the Odisha CM said, “The Panchayati Raj Department is running some of the most important flagship programmes of the State Government. I am glad that since 2014, the department has successfully completed nearly 25 lakh houses. and has taken great strides in fulfilling the dream of providing pucca houses to all eligible families. It has also taken up pipe water supply projects covering 65 percent of the population, and aims to saturate all habitations by 2024.

The Department has also achieved ODF status for the State. The initiative to reduce distress migration by offering 100 extra days of work with an enhanced wage rate is also an ambitious programme with far-reaching impact.

Minister Pratap Jena said the Department is committed to fulfilling all the promises made to people in rural areas. Housing, Drinking Water, MGNREGA and all other flagship programmes will be effectively implemented for the benefit of the people. The dream of Biju Babu for

Chief Secretary Asit Tripathy said for the rural people, block is the Government. All the benefits of Government programmes reach them through the blocks. So this is a very important department that can change the face of rural life and Mo Sarkar will be a transformative mechanism in this direction.

5-T Secretary V.K. Pandian interacted with BDOs of many blocks including Kantabanji, Junagarh, Pottangi, Subteka, Rajgangpur, Patkura, Athamallick, and some other blocks. During the interaction, Pandian said that the training programme for the officers has been very excellent. The officers are well aware of the provisions of the initiatives, he added. He also said the feedback on the work on rural housing is also very good. All the entitlement certificates will be given to rural people on a camp mode, he further added.

The Principal Secretary PR & DW D.K. Singh elaborated on the efforts taken by the Department for the effective implementation of the Mo Sarkar. A short video on the activities of the Panchayati Raj Deptt was screened.

2020-02-13
Editor in chief
Previous: Ahead of the Bhitarkanika Mahotsav 5T Secretary and Chief Secretary paid a surprise visit
Next: Odisha government signed a memorandum of understanding with HDFC Bank Ltd.