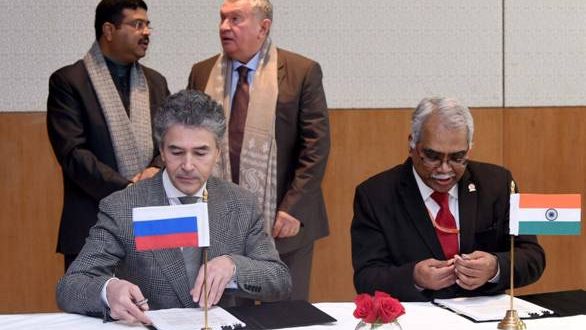 Newdelhi:5/2/20:The Minister of Petroleum & Natural Gas and Steel, Shri Dharmendra Pradhan and Mr Igor Sechin, CEOand Chairman of Rosneft, held the bilateral meeting here today. Both leaders also witnessed the signing of the first-ever Term Contract between IOCL and Rosneft for importing 2 Million Metric Tonnes of Urals grade crude oil during the year 2020 to India. Sourcing of Russian crude oil through long term contracts is a part of India’s strategy for diversifying the country’s crude oil supplies from non-OPEC countries, and a part of the five-year roadmap for bilateral cooperation in the hydrocarbons sector that was signed during Hon’ble Prime Minister Shri Narendra Modi’s visit to Vladivostok last September

.The addition of Russia as a new source for crude oil imports by India’s largest refiner will go a long way in mitigating the risks arising out of geo-political disruptions. The new arrangement would also usher in price stability and energy security for India, which is witnessing robust growth in demand for petroleum products. It will also open up the avenues for other PSU oil refiners to enter into similar term contracts for import of Russian crude oil

Both sides agreed to take forward mutually aligned priorities, including preparing a roadmap for Indian investments in the Eastern Cluster projects of Russia. It was noted that the four Indian oil and gas Public Sector Undertakings (PSUs) have already submitted the Expression of Interest to Rosneft to participate in the project. In order to negotiate the terms of Indian companies entering Vostok Oil in the shortest time possible, it was agreed to create a working group of representatives of Russian and Indian companies. 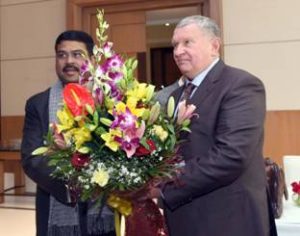 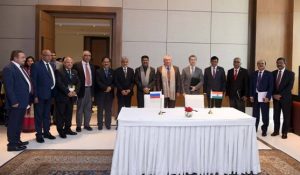 During the meeting, both leaders reviewed the ongoing investments between Indian oil & gas PSUs and Rosneft, and discussed further enhancing energy cooperation and strengthening hydrocarbons engagement, both on investment front as well as sourcing natural gas and crude oil. During the meeting, Shri Pradhan said thatHydrocarbon is an important pillar of the bilateral Strategic Partnership. “Indian oil and gas companies value their association with Rosneft, one of the important companies partnering in India’s energy security objectives.” Both sides agreed to take forward mutually aligned priorities discussed during Shri Pradhan’s visit to Russia in September last year, including preparing a road-map for Indian investments in the Eastern Cluster projects of Russia specially in the Arctic.  Shri Pradhan said that Indian companies especially Engineers India Limited have considerable expertise in providing engineering consultancy as well as executing mega projects across the hydrocarbon value chain.  Mr. Sechin indicated his readiness to intensify cooperation further to strengthen India’s energy security and work jointly with Indian oil and gas companies.

The crude oil, being sourced under the contract, will be loaded in Suezmax vessels at Novorossiysk port of Russia and will come to India, bypassing Straits of Hormuz.

2020-02-06
Editor in chief
Previous: Lawyers’ Association Observes 12-hr ‘Maha Bandh’ In Western Odisha
Next: 11th edition of DefExpo gets off with a spectacular ceremony