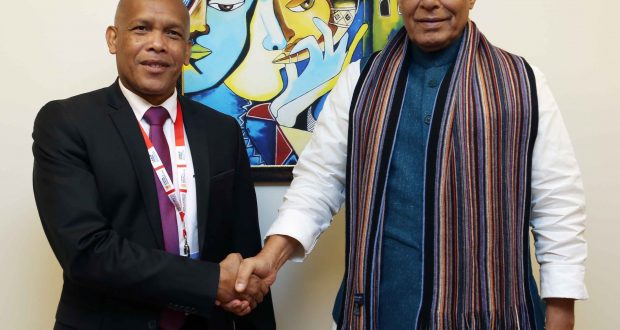 The Union Minister for Defence, Shri Rajnath Singh meeting the Defence Minister of Madagascar, Lt. Gen. Rokotonirina Richard, on the sidelines of the DefExpo2020, in Lucknow on February 06, 2020.

in National February 6, 2020 Comments Off on Defence Ministers of India and Madagascar reiterate maritime security cooperation in bilateral talks 589 Views

During the discussions, Raksha Mantri stressed upon enhancing ties in Maritime security cooperation in the region. He said that, as maritime neighbours both countries have responsibility to ensure a secure maritime environment so that trade and commerce flourish.

Raksha Mantri hoped that the DefExpo 2020 would provide a platform for both the countries to further strengthen the defence ties and in exploring various areas of mutual engagement.

In his remarks, Lt Gen Rokotonirina Richard said India has a great role to play in preserving security in the Indian ocean maritime region. He expressed his Government’s sincere gratitude for ‘Operation Vanilla’, in Which Indian Navy provided assistance to the affected population of Madagascar post devastation caused by Cyclone Diane.

The Defence Minister of Madagascar invited Raksha Mantri to the independence day celebrations on June 26 this year.