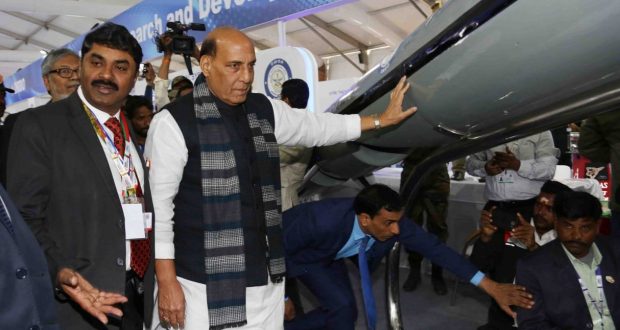 11th edition of DefExpo gets off with a spectacular ceremony

Newdelhi:5/2/20:Raksha Mantri Shri Rajnath Singh Mantri said that the creation of two Defence corridors was a result of Prime minister Shri Narendra Modi’s vision of leading India to become a technological powerhouse catapulted through policy initiatives such as Make in India, Start-up India and Skill India. Speaking at the inauguration ceremony of Defence Expo 2020, Raksha Mantri said that the Nation would benefit from the defence industrial eco- system being setup and developed using cluster development.

Prime Minister Shri Narendra Modi inaugurated the 11th Edition of Defence Expo at a spectacular ceremony in Lucknow. The biggest ever of its kind, DefExpo 2020 would showcase India’s military might and technological innovations.

In order to make India a defence manufacturing hub, Shri Rajnath Singh said that the key was cooperation among various countries and the global defence manufacturing companies. He said that companies from around the world were bringing together their individual competencies in order to collaborate and share know-how with Indian companies to create a win-win situation. Raksha mantristressed that India, with its large market base, recent technological advancements, software know-how and a fast-developing defence industry, was ideally suited to act as a facilitator and collaborator in this field. He mentioned that technology leaders, manufacturing hubs, and software companies were collaborating to create cost effective and efficient advanced solutions.

Raksha Mantri said, a number of Policy initiatives have been taken to unleash the potential in defence production in the country. The Foreign Direct Investment (FDI) cap was liberalised to 49% through the direct route, and above that upto 100 % through the government route. The procedures for industrial licensing, defence procurement and defence acquisition were simplified. Also the single window clearance system was introduced to reduce the time required for various permissions for setting up of defence manufacturing units in India.

Highlighting the features of the India Pavilion at the DefExpo, Raksha Mantri said Technologies like Artificial Intelligence (AR), Augmented Virtual Reality(AVR), Autonomous Systems, Internet of Military Things (IoMT) and Industry 4.0 were showcased and was a reflection of the priorities of the Government. He mentioned that the push given by various policies to leverage the technology shall help the defence industry to reap benefits many-fold.

In his opening remarks, Raksha Rajya Mantri thanked the Prime Minister Shri Narendra Modi for bringing a shift in policies that gave a boost to Make in India initiatives in defence manufacturing. He said that DefExpo 2020 was the biggest ever such event being organisedin the country where companies from more than 170 countries are participating. He hoped that DefExpo 2020 would act as a enabling platform that shall catalyse the Make in India initiatives in the country.

Addressing the gathering Chief Minister of Uttar Pradesh Shri Yogi Adityanath said this edition of DefExpo 2020 being held in Lucknow was a matter of pride for the state. The defence corridor setup here would create world class defence ecosystem that shall cater to the technological needs of the defence companies. During DefExpo 2020, he said Uttar Pradesh Government would sign 23 MoUsenvisaging Rs 50,000 crore investment and providing job opportunities to over 3 lakh youth.

A short film on the opportunities in the aerospace arena in the country was showcased during the inauguration ceremony.

DefExpo-2020, a flagship biennial event of the Ministry of Defence, Government of India, one of the largest events of its kind is being held for the first time in Lucknow, Uttar Pradesh from 5 th to 9 th Feb 2020. The 11th edition of Def Expo promises to bring new technologies, technological solutions, where Defence manufacturing companies from India and abroad showcase their products and services in Defence arena, on a single platform. Large number of foreign delegates including defence ministers from 40 countries are attending the expo, where a number o