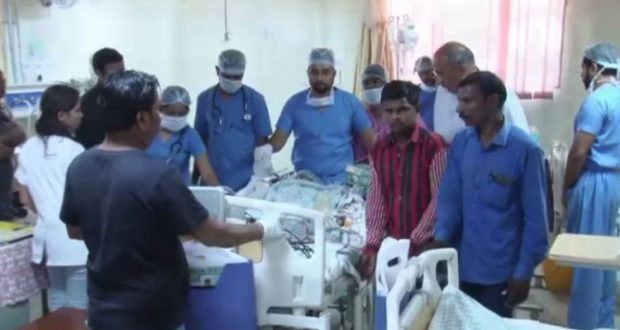 in State News February 4, 2020 Comments Off on SCB Medical College and Hospital Cuttack hosted the first of its kind cadaver kidney transplant in Odisha 1,110 Views

Cuttack: 4/2/20:The SCB Medical College and Hospital (SCBMCH) in Cuttack hosted the first of its kind cadaver kidney transplant in Odisha.

This can be termed as a significant milestone in the history of Odisha’s healthcare services.

Reportedly, one Priyanka Patra (22) of Digapahandi area in Ganjam district succumbed to her injuries at Apollo Hospital, Bhubaneswar.

Later, her kidney was brought to SCB Hospital last night for transplantation as the family members of the deceased consented the organ donation.

A several-hour long operation was carried at SCB to save a man’s life by way of a kidney transplant. The surgery commenced around 5.15 am and concluded around 8.30 am this morning.

As many as five doctors led by Urology department professor Dr. Datteswar Hota performed the operation.

With cadaveric transplantation, organs like kidney, liver, pancreas, lungs and cornea from brain-dead patients could be harvested on patients requiring it.

Odisha Chief Minister Naveen Patnaik on Tuesday lauded the initiative a family for donating the organs of their deceased member.

The Odisha CM took to his Twitter handle to post a message appreciating one Priyanka Patra’s family who consented the organ donation after the former succumbed to her injuries sustained in a road mishap.

2020-02-04
Editor in chief
Previous: Group of Seven leading industrialized democracies, G-7 have agreed to work with the WHO, EU
Next: India Govt announces setting up of Shri Ram Janmabhoomi Teerth Shetra trust for construction of Ram Temple in Ayodhya