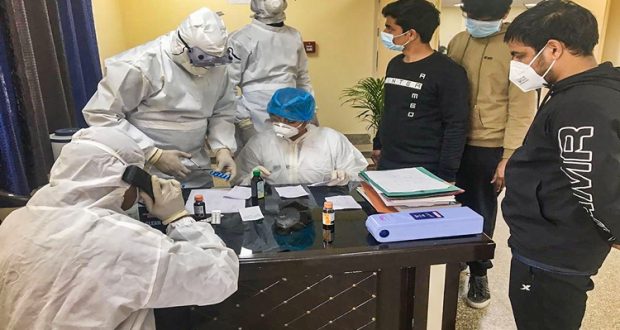 New Delhi: In this handout photo provided by Indo-Tibetan Border Police (ITBP), Indian nationals who were airlifted from coronavirus-hit Hubei province of China's Wuhan, undergo tests inside a quarantine facility set by up ITBP, at Chhawla area of New Delhi, Monday, Feb. 3, 2020. As many as 647 Indians have been evacuated through two special Air India flights amid reports of more than 300 people being killed due to the virus in China. (PTI Photo)(PTI2_3_2020_000109B)

Newdelhi:4/2/20:A Group of Ministers met in New Delhi yesterday to review the preparedness and steps taken by the Ministries of Health, Shipping, External Affairs, Civil Aviation and Home Affairs regarding management of Novel Coronavirus in the country.

The meeting was chaired by the Health Minister Dr Harsh Vardhan.

A presentation of the status of the NCOV-2019 was made to the GoM.

The members were also apprised of the three cases reported from Kerala, one of which was confirmed yesterday.

The preventive steps and measures taken for management of spread of Novel Coronavirus in India were presented, which included information about the revised travel advisories issued on Sunday regarding the temporary suspension of the e-visa facilities.

The Advisory has been revised informing the public to refrain from travel to China and that anyone with travel history to China since the 15th of last month and from now on could be quarantined.

Further, e-Visa facility for Chinese passport holders has been temporarily suspended, e-Visa already issued to Chinese nationals is also not valid temporarily and the facility for submitting the application online for the physical visa from China is suspended.

It has also been advised that people having compelling reasons to visit India should contact the Indian embassy in Beijing or consulate in Shanghai or Guangzhou. Instructions to comply with above travel advisory have also been issued to all national and international airlines operating from China by the Ministry of Civil Aviation.

The GoM was also briefed that a total of 593 flights have been screened covering a total of 72,353 passengers. Screening of passengers is ongoing in 21 airports, international seaports and border crossings particularly with Nepal.

Universal screening in all flights from Singapore and Thailand besides Hong Kong and China is being done.

Further, 2,815 people are presently under community surveillance in 29 States and Union Territories. Out of a total of 338 samples sent for testing, 335 have been found to be negative, three are positive, while 70 others are being processed.

Principal Secretary to Prime Minister PK Mishra also reviewed the situation relating to Novel Corona Virus in the country and the arrangements for approximately 600 evacuees.

2020-02-04
Editor in chief
Previous: Babenco: Tell Me When I Die by Barbara Paz bags Golden Conch Award for Best Documentary Film at MIFF 2020
Next: Group of Seven leading industrialized democracies, G-7 have agreed to work with the WHO, EU