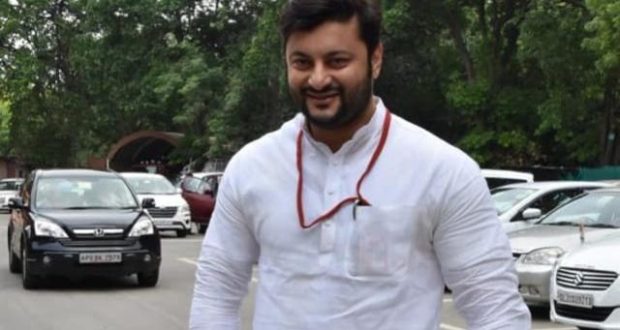 in Politics February 2, 2020 Comments Off on BJD MP from Kendrapara Anubhav Mohanty rubbished the allegations leveled by Odisha Congress against him 918 Views

Bhubaneswar:2/2/20: BJD MP from Kendrapara Anubhav Mohanty today rubbished the allegations leveled by Odisha Congress against him saying that he submitted false affidavit on his educational qualification during 2014 Rajya Sabha election.

In a statement, Anubhav said, “The Congress press meet is a deliberate and malicious attempt to malign and defame me. The allegations made are completely false and baseless. I have dutifully undertaken my education and have reflected it honestly in my election affidavit submitted to the Election Commission.”

Earlier in the day, Congress leader Nishikant Mishra held a press conference and accused Anubhav of presenting a false affidavit while filing nomination for 2014 Rajya Sabha polls. Nishikant alleged Anubhav produced wrong educational details in the affidavit by saying that he graduated in Public Art subject from Souvik University of Technology, Meerut in 2014.

But the university was blacklisted in 2010. “When a university gets blacklisted no one can take admission or appear in exam. Above all, as per the RTI, Anubhav has not taken migration certificate from Utkal University for taking admission in Souvik University of Technology. This shows that Anubhav is still a Plus III student of Kandrapur College, Cuttack,” alleged Nishikant.

He demanded strict action against Anubhav for presenting false information about his educational qualification in the Rajya Sabha poll affidavit.