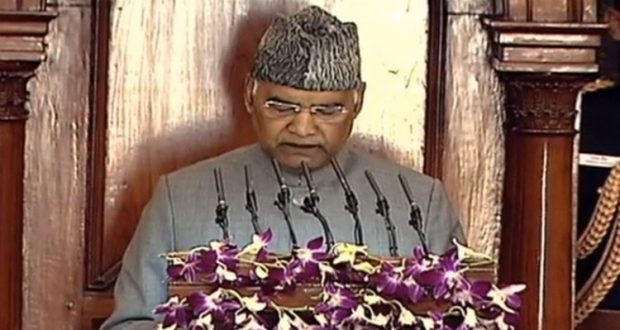 in National January 31, 2020 Comments Off on President Ram Nath Kovind said abrogation of Article 370 and Article 35A has paved way for equal development 654 Views

Newdelhi:31/1/20:President Ram Nath Kovind said abrogation of Article 370 and Article 35A related to Jammu and Kashmir, has paved way for equal development of the regions and people in Jammu and Kashmir and Ladakh have got rights on par with the rest of the country. He was addressing the joint sitting of both the houses f Parliament at Central Hall today.

The President hailed the Citizenship Amendment Act as historic and said it has fulfilled wishes of  Father of the nation Mahatma Gandhi.   Mr. Kovind said, the mutual debate and discussion on any issue strengthen democracy, while violence during protests weaken it.

Mr Kovind highlighted several work done by the government at the ground level in the last five years which has helped India’s ranking on several International ranking indices. Lauding the contributions of farmers, the President said that bringing about a change in their lives is the priority of the government.

Talking about the health initiatives, Mr. Kovind said, impact of the Ayushman Bharat Scheme on the health sector of the country is visible. On women safety, the President said that the more than 600 One Stop Centres have been set up in the country and a national database has been created to identify the perpetrators of crimes against women.

He asserted that the government is working with full strength and determination to free the country from the scourge of terrorism. He said the security situation in the North East has also improved significantly due to the concerted efforts of the government.

2020-01-31
Editor in chief
Previous: Economic Survey 2019-20 emphasizes on entrepreneurship, Wealth Creation at Grassroots
Next: Union Budget 2020-21 to be presented in Lok Sabha tomorrow