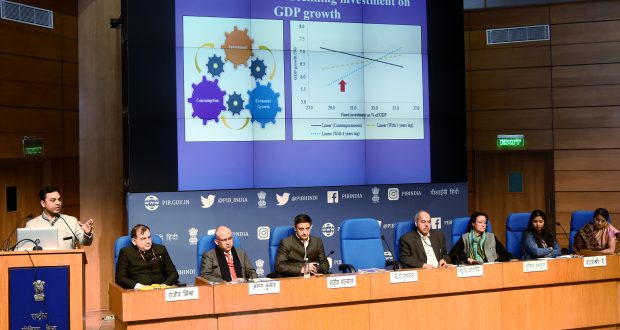 in National January 31, 2020 Comments Off on Economic Survey 2019-20 emphasizes on entrepreneurship, Wealth Creation at Grassroots 607 Views

Newdelhi:31/1/20;Economic Survey 2019-20 has emphasised on entrepreneurship and Wealth Creation at the Grassroots. It has suggested that industrial sector performance is a key to achieve the target of a five trillion dollar economy.

The Economic Survey 2019-20, tabled by the Finance Minister Nirmala Sitharaman in Parliament today, also suggested sectoral initiatives for industrial revival. The survey has projected economic growth at 6 to 6.5 percent in the next fiscal. It called for more reforms for making it easier to do business in country.

The survey said for India to achieve a five trillion US dollar economy depends on promoting pro-business policies, strengthening the invisible hand of the market and ease of doing business. The Economic Survey gave a detailed analysis of the trends in India’s infrastructure sector which is necessary for growth. Power shortages, inadequate transport and poor connectivity affect overall growth performance.

To achieve GDP of five trillion dollar by 2024 – 25, India needs to spend about 100 lakh crore rupees on infrastructure. According to the survey, there is a significant jump of around 2.62 crore new jobs with 1.21 crore in rural areas and 1.39 crore in urban areas. Over 69 lakh candidates have been trained under Pradhan Mantri Kaushal Vikas Yojana till November last year.

The Economic Survey underscores various programmes and legislative measures that are in place to encourage female participation in the economy. Talking exclusively to media person  Chief Economic Advisor Krishnamurthy Subramanian said that India has certainly made substantial progress in improving ease of doing business.

2020-01-31
Editor in chief
Previous: Current Parliament Session should lay strong foundation for a bright future of the country :
Next: President Ram Nath Kovind said abrogation of Article 370 and Article 35A has paved way for equal development