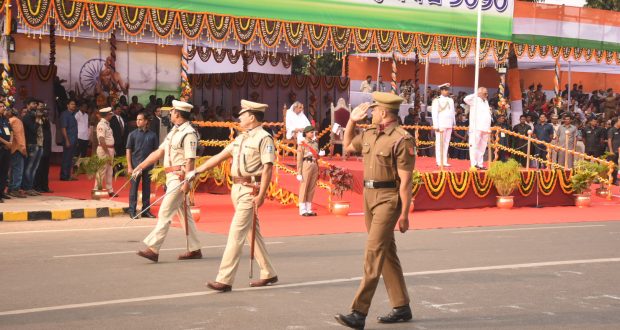 State-level celebration of 71st Republic Day was celebrated in Bhubaneswar

in State News January 26, 2020 Comments Off on State-level celebration of 71st Republic Day was celebrated in Bhubaneswar 646 Views

Bhubaneswar: The State-level celebration of 71st Republic Day was celebrated in Bhubaneswar with a parade by different regiments of armed forces and display of tableaus of different departments.

As many as 48 troops took part in the parade, which was led by Sagarika Nath, DCP, Traffic, Commissionerate Police. The parade also featured cultural performances, skating, 12 tableaus and stunt on motorcycles by Maharishi Daredevils of Maharishi College of Natural Law.

The Governor and the Chief Minister wished countrymen on the occasion of the Republic Day.Patnaik paid homage to the freedom fighters and martyred soldiers of the nation. The CM said that service, courage, dedication and determination will be the new identity of the state. He urged the people of Odisha to work unitedly towards development of the state

2020-01-26
Editor in chief
Previous: Odisha showcased its rich cultural heritage through a tableau featuring Lingaraj Temple and Rukuna Rath
Next: On the occasion of 71st Republic Day as many as 60 officers and men from Odisha Police were decorated with medals