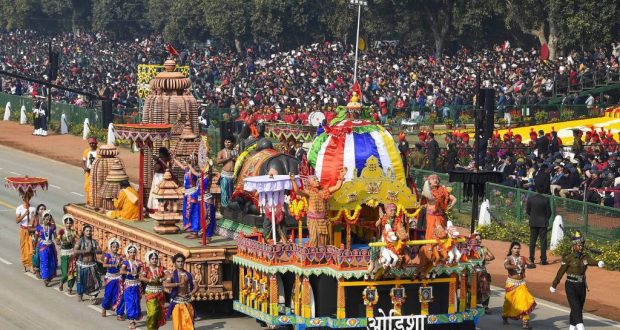 in National January 26, 2020 Comments Off on Nation celebrated the 71st Republic Day with a grand military parade and exhibition 596 Views

Newdelhi:26/1/20Nation celebrated the 71st Republic Day today with a grand military parade and exhibition of its history, cultural diversity and strategic weaponry at the Rajpath in the National Capital.

President Ram Nath Kovind unfurled the tricolour and took the salute of the parade. President of Brazil Jair Messias Bolsonaro was the Chief Guest at the Parade this year.

The Republic Day ceremony commenced with Prime Minister Narendra Modi paying homage to martyrs at the National War Memorial instead of Amar Jawan Jyoti. The National Flag was unfurled followed by the National Anthem with a booming 21-gun salute.

The parade started from Vijay Chowk and proceeded towards the Red Fort grounds. It was commanded by Parade Commander, Lieutenant General Asit Mistry, General Officer Commanding, Headquarters Delhi Area. The winners of the highest gallantry awards followed him. They include the winners of the Param Vir Chakra and the Ashok Chakra. 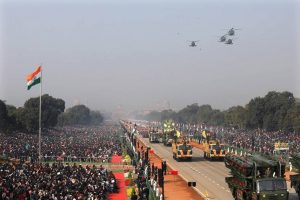 The country’s military might, cultural diversity, social and economic progress was on display at the Republic Day Parade at Rajpath. For the first time, a contingent of women bikers of CRPF performed daredevil stunts. Sixteen states and Union Territories and six Central Ministries participated in the Parade.

Jammu and Kashmir participated in the parade for the first time as a Union Territory. Start-up India, Jal Jeevan Mission and financial inclusion were some of the themes of the tableaux of Ministries and Departments. The Air Force tableau displayed models of the Rafale aircraft, Tejas aircraft, Light Combat Helicopter, Akash Missiles System and Astra Missiles.

The major attraction was fly-past by the newly inducted Chinook and Apache helicopters along with Sukhoi and advanced light helicopters. Anti-satellite weapon – Mission Shakti, Army’s battle tank Bhishma were also showcased during the 90-minute long parade.

Sixteen marching contingents from the Armed Forces, Para-Military Forces, Delhi police and NCC along with 13 Military bands were also the centre of attraction.  The ceremony culminated with the national anthem and the release of colourful balloons.