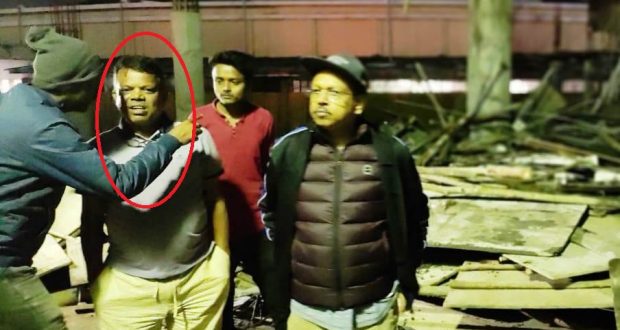 Bhubaneswar:25/1/20; Commissionerate Police today began the investigation into the collapse of an under-construction roof of a link building between Terminal 1& 2 at Bhubaneswar Airport last night.

Reportedly, four persons have been arrested so far in this case under Sections 304/34 of the IPC. The arrested were identified as Managing Director of Dilip Constructions Pvt Ltd, Dilip Khatoi, Airports Authority of India (AAI) AGM Asish Sarkar and two engineers-Abhilash Sarkar & Goutam Ray.

The Managing Director of Dilip Constructions Pvt Ltd, Dilip Khatoi was today grilled at Airport Police Station where he was questioned about the reason behind the roof collapse which claimed the life of a labourer and left another critically hurt.

During interrogation, Khatoi claimed that all the workers engaged in the construction work always wear proper safety gears like helmet, gumboots etc. He said, “The roof collapsed due to heavy load. The labourers were not at their work stations and were about to leave when the accident took place.”

“An expert team has been formed to inspect the blueprint, project execution and the quality of raw materials used from the construction work,” Sahoo informed, adding that the team comprises officials of Works department and civil engineers.

This apart, a team of Forensic Laboratory has been roped in for inspection of the mishap. The Bhubaneswar DCP had previously said that they were looking into the matter and if they find any criminal negligence which led to this accident, and then the Commissionerate Police would take necessary legal action.

Following a preliminary probe and interrogations, police have arrested Dilip Khatoi and three others in this case.

On the other, Bhubaneswar Airport director VV Rao today said: “It is an unfortunate incident and a probe will be conducted to ascertain the cause behind the collapse of the under-construction roof. Soon, a committee will be formed by the AAI, which will arrive here to investigate the incident. A complaint will also be filed with the police by the Biju Patnaik International Airport (BPIA) authorities.”

It may be mentioned here that an under-construction roof of a link building joining the Terminal 1 and 2 of the City Airport collapsed at around 11 pm on the night of Friday. While a labourer died another was rescued from under the debris with critical injuries. The deceased labourer has been identified as Antarjyami Guru, a native of Badamba in Cuttack district, while the injured, identified as Naba Kishore Swain, a resident of Dhenkanal has been admitted to the Capital Hospital for treatment.

On being informed, NDRF, ODRAF and Fire Service personnel reached the spot and managed to pull out two labourers trapped under the huge pile of debris.

2020-01-25
Editor in chief
Previous: Odisha Government effected a major reshuffle in the Odisha Administrative Service
Next: Government and opposition must move forward in tandem to ensure the country’s development and welfare of its people: President Kovind