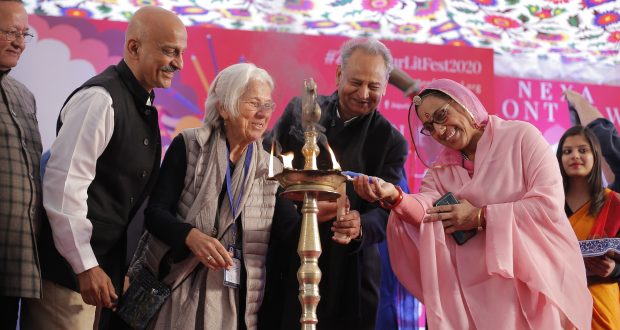 in Literature January 24, 2020 Comments Off on ZEE Jaipur Literature Festival 2020 begins with celebrating literature as a unifier of diverse voices 1,072 Views

Jaipur:23/1/20:The ZEE Jaipur Literature Festival entered its 13th year on a chilly Jaipur morning today with all of its characteristic joie de vivre intact. Early risers flocked to grab seats at the NEXA Front Lawn of the Diggi Palace Hotel, which itself was dressed in its colourful best and reverberated with heady beats from dhaaks and nagadas with its extravagant way of presentation, and listened to their favourite speakers – icons, writers and performers. Attendees were welcomed by much fanfare as life-sized puppets paved the way to the NEXA Front Lawn. Gandhi’s message was showcased by renowned puppeteer, Dadi Pudumjee as he presented an excerpt from his celebrated production, ‘Images of Truth’.  The Mumbai-based classical vocalist, Nirali Kartik took the stage by storm with Raga Gurjari Todi. She sang two bandish – Meri Akhiyaan Lage and Bhor Bhayee, followed by Mero Allah Meherbaan in Raga Bhairav – one of the masterpieces of the Legendary Pt. Jasraj Ji.

Music led the way to the inaugural session of the iconic Festival’s 13th edition which was graced by the Honourable Chied Minister, Key Note Speakers Marcus du Sautoy and Shubha Mudgaln and Festival Directors Namita Gokhale and William Dalrymple.

At the inaugural, Chief Minister of Rajasthan, Ashok Gehlot said, “I was the Chief Minister when the festival began and so I’ve seen it from its first year. Namita Gokhale, Sanjoy K. Roy and William Dalrymple have done an exceptional job at curating the Jaipur Literature Festival which has put Jaipur on the world map”

In his welcome speech, Sanjoy K. Roy, Festival Producer and Managing Director of Teamwork Arts, emphasised on the power of literature which can fight any odd, as can the arts. All of us have a responsibility to do so, he said and added, “We all must speak with one voice – a voice filled with empathy and love for each other. Even as tribalism grows across the world, and countries build walls around them, we have to remember that finally, we are all human beings joined together on this earth by the common cause of humanity. The arts, literature, music, theatre and dance can help create an understanding and remove the fear of the ‘other’ that we all face.” 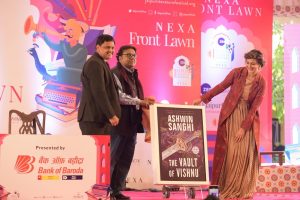 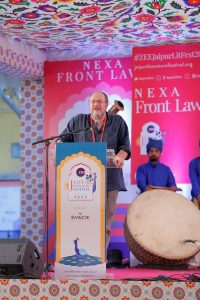 Welcoming the audience, William Dalrymple, Festival Co-director, Jaipur Literature Festival Said, “Why has the literary festival taken off in this country in this extraordinary way?  So, the idea that a literary festival is a foreign import is something that can’t be maintained. We’ve tapped into something very deep here. Literature is alive and is loved in India.”

Co-Festival Director Namita Gokhale also spoke – “We live in puzzling times. Polarities of the political distract us from urgent issues of the climate emergency. At a time when people live in echo palaces and ego castles, we examine and interrogate our changing world by listening to every shade of opinion. My co-director William Dalrymple and I have together curated a program that covers a very wide range of things at the festival”

Giving out the keynote address, eminent author Marcus Du Sautoy said, “Adding my welcome to the 13th edition of the JLF, I like what Srinivasa Ramanujan used to say about numbers: that every number has its own particular character in the story of mathematics. For me it is thirteen; thirteen is a prime number, an indivisible number and the JLF is certainly a festival in its prime.”

While delivering her part of key note address, much loved Hindustani singer Shubha Mudgal said, “Hierarchies should have no place in the arts. As long as art exists in all its richness and diversity, we can dream of a better tomorrow.”

The session after the inaugural took us to the world of theatre in New York City of the 1940s, a story of showgirls, playboys, actresses and dancers. Elizabeth Gilbert’s latest novel, City of Girls, has a set of wanton and promiscuous young women who behave with incredible sexual recklessness and reap its consequences.

The Festival’s first day focused on sessions which explored a woman’s right to be free of every societal stereotype including sexual freedom and finding her identity in non-conventional lifestyles. When Franco-Moroccan novelist, Leila Slimani, author of the powerfully unconventional Adèle, was in conversation with the art-writer and curator, Avni Doshi, she stated tellingly that some women want to be just objects! “All my books are fairy-tales!’’ said Slimani as she talked about the French title of her book: Dans le jardin de l’ogre (A Doll in an Ogre’s Garden).  “Adèle wants to be an object, a doll.” A doll who wants men to tell her what to do. Slimani said that this book was written out of the fascination that she has towards the phenomenon of addiction. Adèle is addicted to sex and her husband, who is a doctor, thinks of her as a patient with a scope of being cured. He holds onto this hope since he loves her so much; he knows there is a mystery behind her, but he chooses not to face it.

One of India’s highest selling English fiction authors, Ashwin Sanghi, launched his book The Vault of Vishnu through Sonali Bendre Behl at the ZEE Jaipur Literature Festival 2020. Keeping in line with his exciting amalgamation of myth and history, Ashwin unveiled the book as the sixth addition in his Bharat series.

In a session titled “Food for Thought: Gastronomy and Literature” at Jaipur BookMark, the B2B section of the Festival, renowned food & and travel writer Madhur Jaffrey said,” There’s no such thing as curry – no Indian will know what you’re talking about if you use that word.”  The word kills the individuality of every unique dish and flavour from different parts of India, according to her. She said she resisted the word for 30 years, but publishers wanted books about curry, so she eventually had to give in.

In another session at Jaipur BookMark, public librarian Aspen Walker referred to her work with the Boulder Colorado library to outline some ideas for what a library should do. The Boulder Colorado library functions not only as a collection of books but also as a space for exhibitions, cultural activities and social interactions. She quoted library science expert S.R. Ranganathan to say that “libraries are a growing organism”. According to her, the cells of this organism are the people who visit it. Thus, the library must always attempt to reach out to people and involve them in its activities. Modern libraries indeed do face multifaceted challenges. University of Chicago Press Director Alan Thomas described the library at the University of Chicago as a very important physical space where people do not just come to read. They come for coffee dates, seminars and to gaze at artwork. Despite the library being an important part of the cultural life at the university, Thomas said that it is increasingly “endangered by private forces” in the publishing industry.

The fifth edition of this prestigious “Mahakavi KanhaiyaLal Sethia Award for Poetry” has been awarded to Arvind Krishna Mehrotra, a well-known name to readers of contemporary literature. The award was presented to Mehrotra by Hon.Deputy Chief Minister Sachin Pilot. This is Sethiaji’s 100th Birth Centenary Year.

In the session “Darjeeling Express: Of Food and Friendship”, well known chef said, “Cooking was traditionally undervalued and considered inferior because it was the women who undervalued herself.”

A series of soulful poetry readings were presented to the audience, relishing the magic of metres. Poets from all walks of life narrated their lines with enthusiasm and zeal, like, Annie Finch, the famed American poet, spoke about the therapeutic qualities of poetry. “For me, poetry is a physical pleasure.

Nandita Das was in a conversation with Kaveree Bamzai in a session Dedicated to Manto. Manto & I is a book of images and words that traces the journey of making Nandita Das’ film, Manto, a compelling biopic on one of the subcontinent’s most fiery and controversial writers, Saadat Hasan Manto. She has candidly shared not just her creative but also her emotional, socio-political and spiritual experiences of the six years spent with the film.

In the session “The New Silk Roads: The Present and Future of the World” presented by Aga Khan Foundation, author Peter Frankopan said, ‘’From European mentality, people love the Silk Roads because for them, they instantly think about British spies or people working for the state, or arriving in Bukhara in the 1840s and being beheaded in the town-square…From a Chinese perspective, the Silk Roads talks about not just about the modern world but it talks about the old world of Tang and Sung dynasty, when China was much more connected to its Western neighbours…The Iranians think they invented the Silk Roads…It takes the society from Africa to Europe to Central Asia to South Asia…It speaks of a world interconnected a long time ago before the Modern Age.”

In his keynote address on Independent Publishing at JBM Haweli, Michael Dwyer said, “As independent publishers, develop niches but do not become slaves to them.”

2020-01-24
Editor in chief
Previous: Politicians or the local MLA were not inducted in the governing body of the degree colleges
Next: Republic Day 2020 : India’s front-running women-led ventures addressing social issues