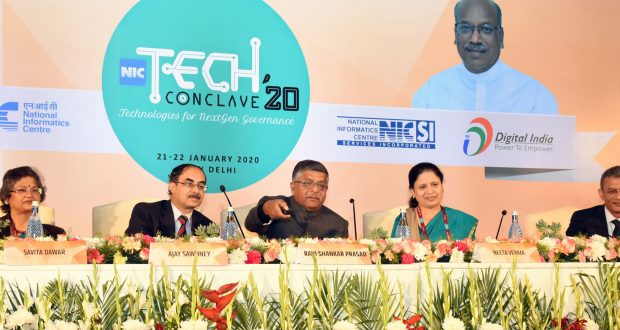 The Union Minister for Law & Justice, Communications and Electronics & Information Technology, Shri Ravi Shankar Prasad at the inauguration of the NIC Tech Conclave 2020 with the theme - Technologies for NextGen Governance, in New Delhi on January 21, 2020. The Secretary, Ministry of Electronics & Information Technology, Shri Ajay Prakash Sawhney and other dignitaries are also seen.

Newdelhi:21/1/20:The Union Minister for Law & Justice, Communications and Electronics & Information Technology, Shri Ravi Shankar Prasad has said that the technology should be designed to make life easier and simpler. He was addressing the gathering after inaugurating the 2nd Edition of NIC TechConclave 2020, organized by the National Informatics Centre (NIC), here today.

Shri Ravi Shankar Prasad said that the NIC should engage people from outside the system to have their views and advises to amend the system accordingly. He further said that we need a Government that has transformational change as a character. Technology has become the biggest enabler of governance for transformation, he added.

The Minister for Electronics and IT said that technology should be low cost, developmental and inclusive. He coined a new slogan that Digital India means technology from the Classes to the Technology for the masses. This conclave must find the emerging challenges and also the way out for it, he tasked.

Saying that more and more rural empowering missions must be thought of as a model of governance, Shri Ravi Shankar Prasad said that NIC has helped monitoring the Swachch Bharat Campaign in the country. Technology should be designed to fulfill the aspirations of the people, he added.

Shri Ravi Shankar Prasad said that data is going to drive the Technology and governance. We all must understand the impact of data. He narrated five corners for Data – Data Availability, Data Utility, Data Innovation, Data Anonymity and Data Privacy. We need to have these five corners in mind while handling data, he said. India should become a big centre for Data refining process and NIC should work in that direction, he added.

The Secretary – MeitY, Shri Ajay Sawhney, the President, CISCO (India and SAARC), Shri Sameer Garde, the Director General, NIC, Dr. Neeta Verma and other dignitaries were present on the occasion. 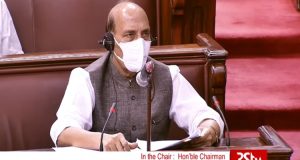 Bhubaneswar16/9/20:: A 6-member Central team led by Joint Secretary (LWE) of Home Ministry, Praveen Vashista, is on a 2-day visit to Odisha for an on-the-spot assessment of the damage caused by ...