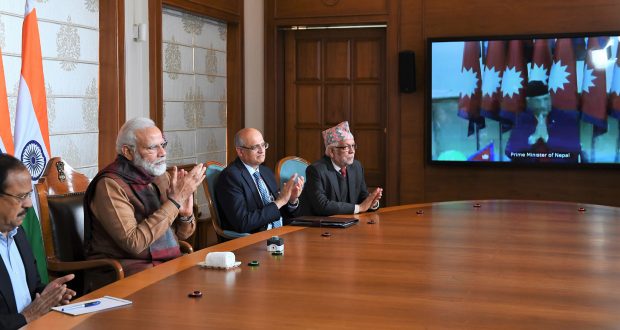 Jogbani – Biratnagar is an important trade point between the two countries. The ICP is equipped with modern facilities.

The second Integrated Check Post at Jogbani – Biratnagar was built with Indian assistance to facilitate trade and people’s movement across India-Nepal border.

Both the Prime Ministers were participating through Video Conference.

In his remarks the Prime Minister Shri Narendra Modi said, “India has been playing the role of a trusted partner in Nepal’s all round development.”

He said, “ ‘Neighbourhood first‘ is the main policy of my Government and improving cross border connectivity  is an important aspect of it.”

Shri Modi said, “the issue of better connectivity becomes all the more important if it concerns India- Nepal, because our relations are not simply of neighbours but because History and Geography have connected us through culture, nature, families, language, development and many more threads”.

Prime Minister said, “My Government is committed to develop better transportation facilities with all the friendly nations and to further develop relations in trade, culture, education etc “

Referring to 2015 Earthquake in Nepal Prime Minister Shri Modi said, “India played the role of first responder in relief and rescue operations and now is standing shoulder to shoulder with our friends in the reconstruction of Nepal”.

Out of Government of India’s commitment to build 50,000 houses in Gorkha and Nuwakot districts, 45,000 have already been completed.