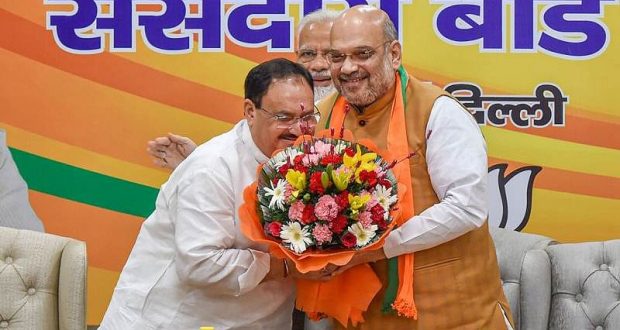 in Politics January 20, 2020 Comments Off on JP Nadda elected unopposed as national president of BJP 701 Views

newdelhi:20/1/20:BJP Working President J P Nadda was elected unopposed as the National President of Bharatiya Janata Party today. Party’s election in charge of organisation, Radha Mohan Singh gave him the certificate of his election on the occasion.

Mr. Nadda, who is from Himachal Pradesh, was appointed as the party’s working president in July last year. He has long been a member of the BJP parliamentary board, its highest decision making body.

He was also the Cabinet minister in the first tenure of the Narendra Modi government. In the run-up to the 2019 Lok Sabha election, he was in-charge of the BJP’s election campaign in the politically crucial state of Uttar Pradesh.