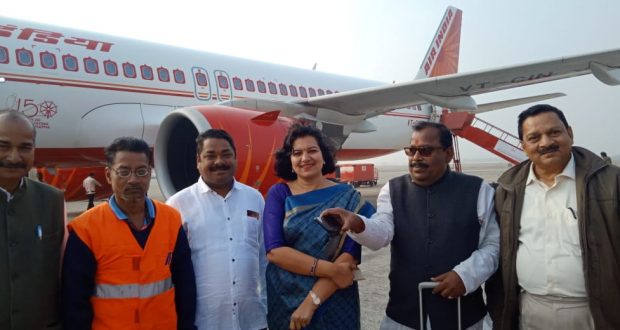 The Air India flight A320 left the BPIA at 8.40 am with 81 passengers on board, informed an airport official.

The direct flight service between Bhubaneswar and Surat will be operated twice a week, said BPIA director Baruda Venkateswara Rao.

As per reports, the flight operations set up by the PSU Carrier Air India to connect Bhubaneswar with the textile hub of Gujarat, Surat will take off every Monday and Thursday from Bhubaneswar airport at 8.40 AM and reach Surat at 10.40 AM.

Similarly, during its return journey, the flight will depart from Surat airport at 8.40 AM and reach BPIA at 10.40 AM on every Friday and Sunday, the airport authority informed.

Sources said that the economy class of the flight was fully booked both ways.

“We are very happy with the direct flight operations. Earlier, we had to go with a stop-over at Delhi. Now the time will be reduced to just two hours,” said a passenger.

Lok Sabha Member and BJP leader Aparajita Sarangi, who also boarded the Surat flight said, “We had been trying to start a direct flight to Surat from last three months. I would like to thank PM Modiji, Civil Aviation Minister Puriji, Petroleum Minister Dharmendra Pradhan and the CMD of Air India Ashwini Lohani. Without their efforts, the flight wouldn’t have flown today.”