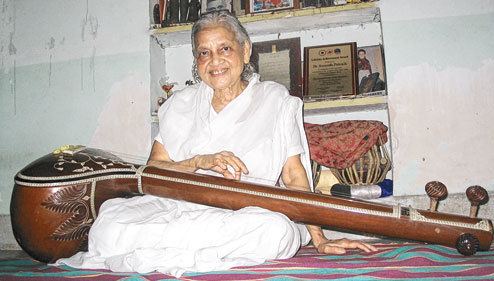 Kolkata:19/1/20: Indian classical singer and Odisha’s pride Sunanda Patnaik passed away at a private hospital in Kolkata today. She was 85.

This was informed by her family today morning. According to sources, she was undergoing treatment due to illness.

Born on November 7, 1934, Sunanda of Gwalior gharana from Odisha was popularly known as “guruma”. She is considered one of the great dames of Hindustani music.

She is the daughter of legendary Oriya poet Baikunthanath Patnaik. She started singing at All India Radio in Cuttack in 1948 at the age of 14. The then Odisha Governor Asaf Ali once heard her on Radio and was very impressed with her singing and she became a regular fixture at the Raj Bhavan whenever the Governor had guests. Once, President Rajendra Prasad heard her at Puri. He was very impressed with her singing and arranged her training under Pandit Vinayak Rao Pattavardhan at Pune with a scholarship.

She received Odisha Sangeet Natak Akademi award in 1970 and 1971. She received Indian lifetime achievement award in 2009 and lifetime achievement award from The Orissa society of the Americas (OSA) in 2012. She is the recipient of sangeet natak academy award (Tagore Akadami Puraskar) for the year 2012. The degree of doctor of literature was conferred to her by the Utkal University in 1999 and the degree of doctor of music was conferred by the Akhil Bharatiya Gandharva Mahavidyalaya Mandal in 1975.

2020-01-19
Editor in chief
Previous: PM to interact with students, teachers and parents at “Pariksha Pe Charcha 2020”
Next: Married to music