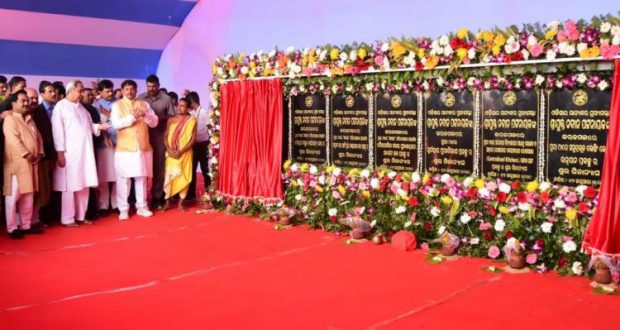 The CM reached at Talabania helipad at 11.45 am and from there he left for Srimandir where he paid obeisance to the deities. The CM spent around 20 minutes inside the Jagannath Temple.

Extending his New Year greetings to the people, the CM said: “I am always happy to visit Srimandir in Puri and prays for the welfare of the people of our state.”

The projects flagged off by the CM includes ‘Shree Setu’, ‘Jagannath Ballav Pilgrim Centre’, ‘Multi-level Car Parking’ and ‘Municipal Market Complex’ under the Augmentation Basic Amenities and Development of Heritage and Architecture (ABADHA) scheme, while other projects include improvement of ‘Swargadwar’, ‘Vending Zone at Sea Beach’ and ‘Centralised Kitchen for Mid-Day Meal and Aahar’.

Conceived to provide direct access-controlled entry to Jagannath Ballav Pilgrim Centre from National Highway 316, the Shree Setu will be a signature bridge representing the rich architecture and heritage of Odisha. Proposed with an allocation of Rs 181 crore, the mega project will boast 2.3km-long bridge and its road. In a bid to execute the initiative, both private and government land will be acquired in Samang, Matitota, MarkandeswarSahi No-1 and DandimalaSahi Mouzas under Puri tehsil.

A six-storey world-class pilgrim centre will be built on the premises of Jagannath Ballav Mutt near Narendra Kona. With an allocation of Rs 190 crore, the pilgrim centre will have multi-level parking for 1,000 four-wheelers, commercial meditation apace apart from other modern amenities.

A multi-level car parking will come up on Jail Road near Hospital Square. With an allocation of Rs 90.22 crore, the four-storey complex can accommodate 500 four-wheelers and bikes.

An ultra-modern market complex will come up on Badadanda with an allocation of Rs 44.82 crore. The five-storey complex (Basement, ground and three floors) will offer 500 vending units, parking space for 100 four-wheelers. The project will have a 300-kilowatt rooftop solar system. 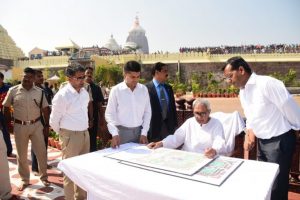 Apart from the improvement of general amenities, the project includes the construction of elevated structures and two electric heaters for cremation. The project has been funded by the Chief Minister’s Relief Fund.

As many as 800 CRZ-complaint vending kiosks will be built at the sea beach with an allocation of Rs 12 crore.

Centralised kitchen for MDM and Aahar:

A central kitchen with state-of-the-art facilities will come up at Mangalaghat. The kitchen which will come up on a 50,000 sqft area will offer 50,000 meals on a daily basis for the mid-day meal and Aahar centres.

Besides, the CM took a review of several mega projects while senior officials also briefed him about the status of the undergoing developmental and beautification projects. Appreciating these works, the CM further adds: “The projects surrounding the temple are very beautiful indeed.”

Notably, in October last year, the Odisha government had sanctioned Rs 3208 crore under the ABADHA scheme in three years to transform Puri into a world heritage city. While Rs 719 crore will be spent under the scheme in 2019-20, the cost of the projects to be taken up under ABADHA will be around Rs 1402 crore and Rs 1087 crore in 2020-21 and 2021-22 respectively.

2020-01-16
Editor in chief
Previous: Samir Mohanty has been elected unopposed as the president of the BJP Odisha unit
Next: ALMA FIESTA’20-THE SOCIAL CULTURAL FEST STARTS OFF ON A GRAND NOTE