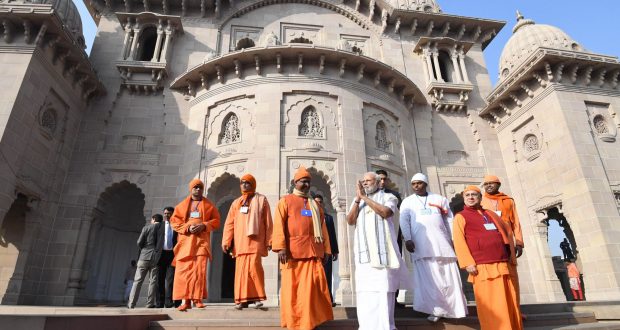 The Prime Minister, Shri Narendra Modi at the Belur Math, in Kolkata on January 12, 2020.

Kolkota:12/1/20:Prime Minister Shri Narendra Modi visited Belur Math in Kolkata today, on the occasion of Swami Vivekananda Jayanti and National Youth Day. He also interacted with the monks in Math.

Speaking on the occasion, the Prime Minister said that for the countrymen, coming to this holy land of Belur Math is no less than a pilgrimage, but for him it was always like coming home. Feeling privileged for spending the night in this holy place, he said that the identity of all the gurus including Swami Ram Krishna Paramahamsa, Maa Sarada Devi, Swami Brahmanand and Swami Vivekananda could be felt here.

Recalling his previous visit, when he had taken the blessings of Swami Atmasthanandaji, the Prime Minister said that he was shown the way of public service by the Swami.

“Today he is not physically present, but his work, his path, will always pave the way for us.”

To the youth of the country, who think that they can’t change the world by doing it alone, the Prime Minister gave a simple mantra, “we are never alone”.

For the 21st century, the country has taken steps to build a new India with great resolve and these resolutions are not just of the government, but also of the 130 crore countrymen, the youth of the country, he added. 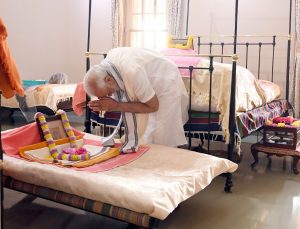 The Prime Minister, Shri Narendra Modi at the Belur Math, in Kolkata on January 12, 2020.

The Prime Minister said that the experience of the last 5 years shows that the campaign to connect with the youth of the country is sure to succeed. He said that till 5 years ago, there was a disappointment whether India can be clean or not, and can the spread of digital payment in India could be increased so much. But the youth of the country took command and the change is visible, he added.

He said that passion and energy in youth is the basis for changing India in this decade of the 21st century. Youth confronts the problem, solves it and challenges the challenge itself. Following this thinking, the central government is also trying to solve the decades-old challenges facing the country, he added.

The Prime Minister said that our culture and our constitution expect us to fulfill our duties as citizens, our obligations with honesty and full dedication. The duty of every Indian should be equally important. And following this path, we will be able to see India in its natural place on the world stage. This was the expectation of Swami Vivekananda from every Indian and this is also at the core of this institution. And all of us are also taking a resolve to make his dreams come true, he concluded.