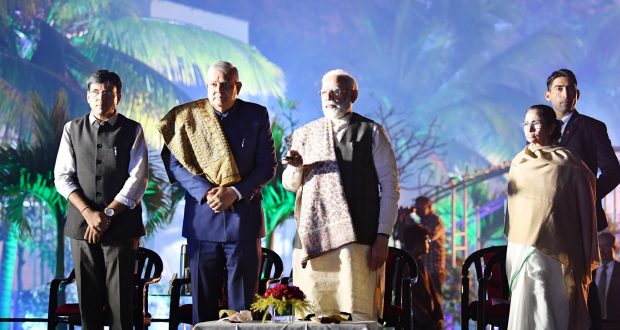 Kolkota:11/1/20:Prime Minister Shri Narendra Modi attended the 150th anniversary celebration of Kolkata Port Trust in Kolkata today. On the occasion, He launched the Interactive Light & Sound Show of Rabindra Setu (Howrah Bridge) in Kolkata. He also witnessed an amazing cultural programme at the venue, marking the inauguration of facade lighting.

Governor of West Bengal Shri Jagdeep Dhankhar,  Chief Minister Ms. Mamata Banerjee and other dignitaries were present on the occasion.

The new decorative lighting of the Rabindra Setu has  650 power-efficient LED and spotlight fittings for a programmable multi-colour lighting including a show that will sync with music. The lights will give the bridge, which is considered an engineering marvel, a more heritage look. The new interactive show is expected to help attract tourists and locals.

Rabindra Setu was commissioned in 1943. 75 year anniversary of Rabindra Setu was celebrated last year. It is an engineering marvel as it does not have nuts and bolts, but was formed by riveting the whole structure. It consumed 26,500 tonnes of steel, out of which 23,000 tonnes of high-tensile alloy steel.