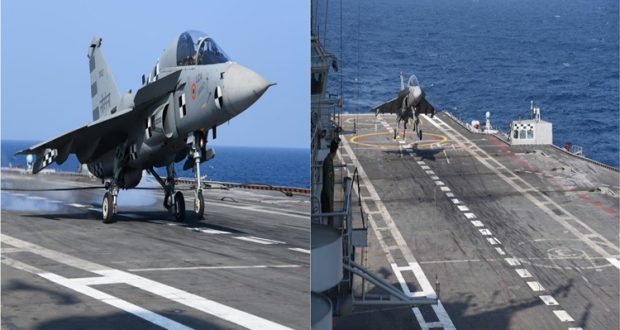 Newdelhi:11/1/20:The naval version of indigenous Light Combat Aircraft, LCA, made its first successful landing on the aircraft carrier INS Vikramaditya today. This aircraft is developed by the Defence Research and Development Organization, DRDO.

Congratulating the DRDO and Navy for this achievement, Defence Minister Rajnath Singh said that he is extremely happy to learn about the maiden landing of naval variant of LCA on INS Vikramaditya. He said, this successful landing is a great event in the history of Indian fighter aircraft development programme.

DRDO in a tweet said, after completing extensive trials on the Shore Based Test Facility, LCA Navy did an arrested landing on INS Vikramaditya. DRDO Chairman, Dr. G. Satheesh Reddy has congratulated the DRDO and other agencies’ team members who were involved in the development of this aircraft.

With the successful landing of Light Combat Aircraft, LCA on aircraft carrier INS Vikramaditya, India has entered into the club of selected nations having the capability to design a fighter jet which can land on an aircraft carrier.