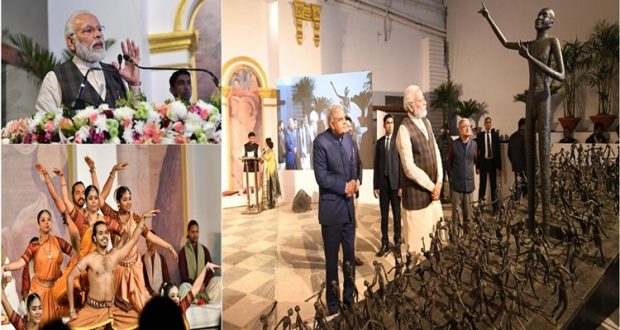 in National January 11, 2020 Comments Off on India Prime Minister calls for making India a hub of heritage tourism 569 Views

Kolkota:11/1/20:Prime Minister Narendra Modi has said that India should be a world-class centre of heritage tourism. Speaking after unveiling a statue at the iconic Old Currency Building in Kolkata this evening, the Prime Minister said, the Centre is planning to set up Indian Institute of Heritage for which work will start from Indian Museum in Kolkata, one of the oldest museums of the world.

The Prime Minister dedicated to the nation four iconic buildings of Kolkata namely Old Currency Building, Belvedere House, Victoria Memorial Hall and MetCafe House after renovation. He said, the government has taken up a plan to modernize five museums of the country to international standard. Mr. Modi is on a two-day visit to the city.

The Prime Minister further said, the country has great regards for Netaji Subash Chandra Bose and the government has recognized his great contributions to freedom movement. The demand of declassification of the files of Netaji was on for several years. Mr. Modi added, the NDA Government declassified them. He also said that other revolutionaries from Bengal should get deserved respect and regard.