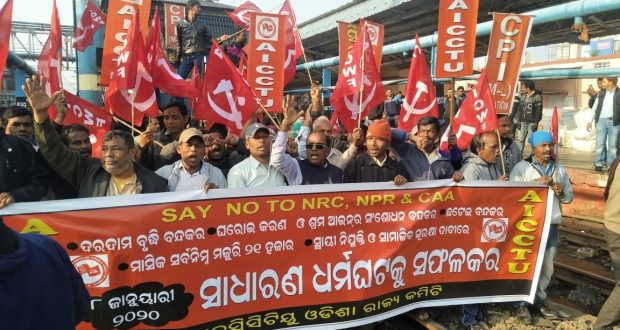 in State News January 8, 2020 Comments Off on Normal life was completely paralysed in Odisha due to the nationwide strike 655 Views

Bhubaneswar:8/1/20: Normal life was completely paralysed in Odisha due to the nationwide strike called by trade unions against what they allege as “anti-people” policies of this government, that is being held since today morning.

The State government had issued prior direction for all government employees to enter their respective offices before 9.30 am.

Public transport system was adversely affected due to the Bharat Bandh call given by Central trade unions.

As several political parties have extended support to the all India general strike, the private bus owners association has decided to suspend bus services as a precautionary measure.

Buses, private cars and other public transport vehicles kept off the road while train services were hit as agitators squatted on railway tracks at different places. There was no report of any violence from districts.

Government buses also stayed off the road. Several passenger-carrying vehicles were seen parked on the roadside after they were not let to pass through.

Agitators at several places across Odisha including  Gunupur in Rayagada district staged road blockade by burning tyres and picketing on busy National highways.