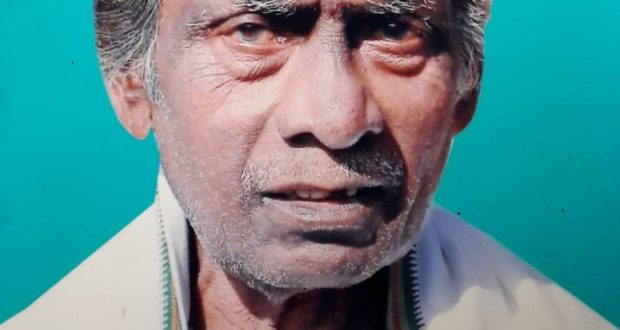 Bansidhar Patra: Great artist whom Odisha ‘erased’ from its canvas!

Bansidhar Patra, renowned painter, designer and artist breathed his last, late night on December 28, but many art lovers of Odisha, Kolkata (where he was educated in art) and rest of the world could not notice this huge loss, as the great artist, never in his life, was after publicity and recognition.

Late Dinanath Pathy, one of the greatest of the contemporary artist of the modern era regarded him as one of his  `Gurus’. Famous artists like Amanta Panda, Harish Sinha, Shyamsundar Patnaik, Lokanatha Satpathy and Baishanb Samal were his contemporaries. However, with “dedication to work and nothing other than that’’ attitude of the great soul always put him away from the public gaze.

He was from Bhusandpur, a well-known village on the outskirts of the Odisha Capital and he also breathed his last there in his paternal village. However, during his 86 years of journey in Life Bansidhar never had a compromise with his conscience and he always did what he thought was right. He always put the creation on the forefront, and not his name as the creator.

Once asked why he was not eager to let his name go with his works, the unassuming painter said “ if we go for names then how many names to be written in the World Heritage site Konark?’’

He was perhaps hinting at the 1,200 sculptors who once built one of the Seven Wonders of the World and they never did this masterpiece in engineering to make a name, but in reality they did executed a work of extraordinary artistic quality. But never there was any hankering for name and pride for the creators of Konark.

One of his greatest contributions could be the fact that he modified the design of the masthead of the iconic Odia daily “Samaja’’ as the-then manager of the  old newspaper Artatrana Mishra, had offered him the job to do as the latter has enough confidence in Bansidhar.

Extraordinary in landscape and design and author of more than 700 poems in his life, the legendary artist was once offered a job to spread Indian Art and Traditional designs across the country by the Consulate General of the US in India, but the proposal could not be materialised due to family issues.

He is good at landscape both in oil and water color medium. During his time a few artists were fond of water color and graphics. He had experimented with many water color process and color litho.  His color lithographs are like water colors. His Indian style of painting is also quite different. In batik and leather craft he was excellent for his non-conventional designs during the early Sixties.

Bansidhar Patra as an artist was loved by many young mass of his time. He is far from any sort of politics in the art field, so was liked by one and all. He was open to share his knowledge with the artists, young and old hence veteran like Dinanatha Pathy was respecting him and treated him like a teacher.

As an artist Bansidhar Patra worked extensively as a freelancer with the  American Library, Calcutta. His many beautiful design works are there as private collections in Calcutta. He could not take the offer of the US Consulate General for spreading Indian art and designs, but throughout his life he remembered it.

The great artist ran a studio in Cuttack and worked for Family Welfare Department, The Samaja Office and many other agencies and organizations as freelance artist. Some of his works are still there in Puri, Cuttack, New Delhi, Kolkata and in USA as private collections.

He made a difference for selection of his works during his academic days for annual exhibitions and was widely discussed in media. He participated in All India Congress Committee (AICC) exhibition at Berhampur under guidance of the legendary Bipra Charan Mohanty. Though he participated in the annual State-level art exhibition of the Odisha Lalit Kala Academy, he did not participate in sale and competition category. He was also offered art teacher’s jobs in schools and art colleges and government departments, but did not join.

Although the artist studied in Bengal, themes of his paintings were based on lifestyle in Odisha, rural Odisha in landscape, figure drawing, graphics and water colour.  He always chose to discuss art education, but his greatest weakness was perhaps the paternal property and due to family dispute he was forced to forgo offers from many good organizations including one from the US Consulate General. 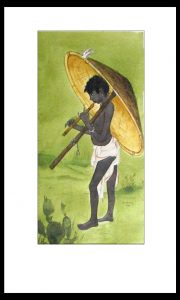 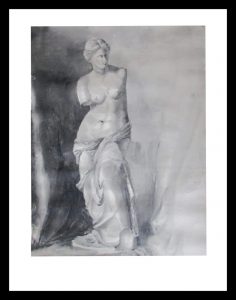 Artistic attributes were full in his life and he was a trained musician in violin as well. Though he was having expertise in playing violin and flute, he preferred the violin.

After primary education from his village Bhusandpur and Matriculation from Tangi High School Khurda, he dropped out for two years. Then suddenly he jumped over to music and joined the violin classes at Kala Vikash Kendra, Cuttack during 1953-54 and completed one year in the violin course. He had also taken preparatory art education course from Muralidhar Tali, Bibhuti Kanoongo, Nityananda Mohapatra and Basanta Kumar Panda.  Then he studied Class XI in Marwari High School and passed matriculation in 1954.

He is survived by his wife Sarojini Patra, son Nihar Ranjan Patra, daughter-in-law Rashmi Choudhury, daughters Lalita, Anuradha and many grand children. In a joint family he spent his life as he had a deep-rooted love for Indian social structure and culture. Throughout his life a fellow villager Nabakishore Barik served him like a true friend till his demise.

However, till his death the great artist was never honoured by the State Lalit Kala Akademi nor the Odisha Government did anything to document his excellent works. It is high time, there should be an effort to initiate a proper documentation process of the works of the outstanding artist.

IFF 52 closes, raising a toast to the never-ending celebration and ardent love for films

Bhubaneswar:5/12/21:Pratibha Ray Foundation Trust & Adya Prakashani have announced the Second Akshaya Chandra Ray Memorial award in the category of Novel(Odia) for 2021. The award, instituted in 2020 and reflecting ...