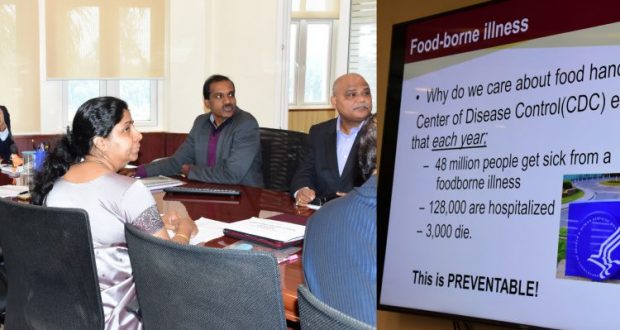 in Smartcity Bhubaneswar January 4, 2020 Comments Off on Odisha Government take a special drive for creating intensive awareness among the street food vendors 807 Views

Bhubaneswar:4/1/20: With the increasing population in the cities, food safety has been brought to focus by the State Government. A high-level meeting to this effect was held under the chairmanship of Chief Secretary Asit Tripathy in Lok Seva Bhawan conference hall today. Reviewing the food safety measures in different cities, Chief Secretary directed the housing & urban development and food safety commissionerate to take a special drive for creating intensive awareness among the street food vendors and the people. Tripathy directed to educate the food vendors about food safety techniques and make people aware not to take unsafe food.

Further, the Chief Secretary directed to examine the possibility of enforcing food safety measures through authorised outsourced agencies with delegation of necessary powers. It was decided in the meeting that Bhubaneswar Municipal Corporation (BMC) would identify the most populous stretches for creation of ‘safe food streets’ in the corporation area on pilot basis. The proposal for ‘Designated Food Safety Officers’ in five Corporation areas was also approved in the meeting. Chief Secretary Sri Tripathy directed to put in place an online system for creating a data base of the oversight and enforcement activities.

Stating the updates, Food Safety Commissioner Smt Yamini Sadangi appraised that there had been a steady increase in the number of registered food business operators (FBOs) in the State over last three years. The total number of registered FBOs has increased from 5,026 in 2016-17 to 25,822 in 2017-18 and 36,622 in the year 2018-19.Principal Secretary Health & Family Welfare Sri NikunjaBihari Dhal, Principal Secretary Housing& Urban Development Sri G. Mathivathnan, Food Safety Commissioner Smt Yamini Sadangi, Director Municipal Administration Sri Sangramjit Nayak along with senior officers from concerned departments participated in the deliberations.

2020-01-04
Editor in chief
Previous: As many as 133 Hindu pilgrims from Pakistan’s Karachi visited the Puri Srimandir
Next: General Council of NLU Odisha approved the 25% horizontal reservation to the domicile of state of Odisha