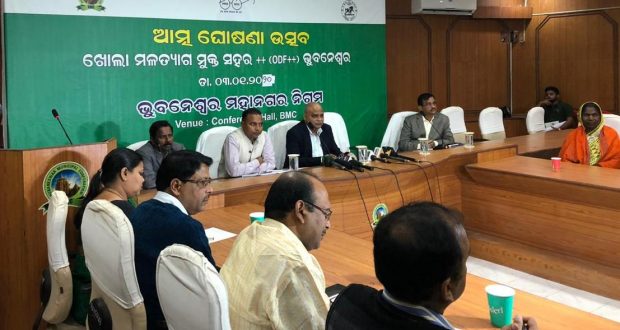 Saying that it was never an ultimate destination to have the ODF ++ status in the kitty of the largest civic body of Odisha, the senior administrator from Housing and Urban Development Department also added that gradually BMC will proceed towards applying for the Garbage Free Cities (GFC) Star Rating as it is always setting a benchmark of its own in the State and has become a role model for others. He also asked the Sanitation team of BMC to get ready for the battle of all-India ranking as the 2020 Swachha Survekshan Survey will comprise 6,000 marks.

It can be mentioned here that while the 2020 survey will involve 4830 urban local bodies this year, the GFC Star Rating will have a seven-star rating programme for making Indian cities garbage free.

Mentioning the faecal sludge treatment plant (FSTP) at Basuaghai as one of the state-of-the-art facilities of city, which has invited great appreciation from other cities and the Centre, he called upon all stakeholders of the city, i.e. hotel associations, petrol pump owners and others to come forward and contribute towards the city’s beautification drives and make it one of the most beautiful, clean and green cities of the country through public-private partnership (PPP) model.

In his inspiring speech, he called upon all stakeholders and officials of BMC and other city authorities to win people’s trust and work towards building world-class facilities as the city is getting a good name in the world of sports.

2020-01-03
Editor in chief
Previous: TRADE UNIONS TO GO AHEAD WITH JAN 8,2020 GENERAL STRIKE
Next: Odia IAS officer Dr Arabinda Kumar Padhee has been included as a member of National Advisory Panel on Agriculture-Nutrition