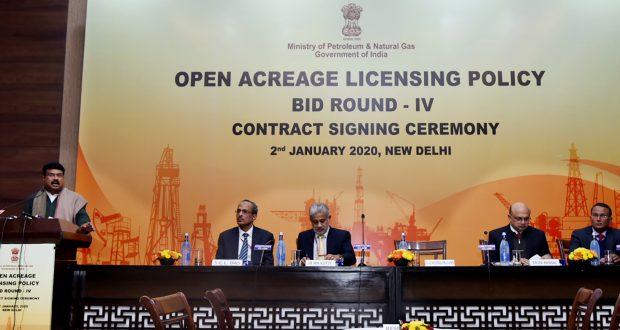 in Business January 2, 2020 Comments Off on Ministry of Petroleum and Natural Gas signs Contracts for 7 Blocks Awarded under Open Acreage Licensing Programme 771 Views

Newdelhi:2/1/20:Ministry of Petroleum and Natural Gas today here signed contracts for 7 blocks, awarded under Open Acreage Licensing Programme (OALP) Bid Round – IV. The Government had launched OALP Bid Round – IV on 27th August 2019. The Bid Round-IV offered 7 blocks  under International Competitive Bidding (ICB) process. The bidding round closed on 31st October, 2019. Subsequent to evaluation, all 7 blocks were approved for award to ONGC, for which the Revenue Sharing Contracts have been signed today, in the presence of the Minister of Petroleum and Natural Gas & Steel, Shri Dharmendra Pradhan. The total area awarded today in the 7 Onland blocks is 18,510 sq.km.. The blocks are spread across 3 sedimentary basins.

Speaking on the occasion, Shri Pradhan highlighted the success of OALP Bid Rounds under the ambit of Hydrocarbon Exploration and Licensing Policy (HELP) introduced in the year 2016, primarily characterized by Revenue Sharing Mechanism replacing the earlier New Exploration and Licensing Policy (NELP) which had Production Sharing Mechanism. He said, “In the last two and a half years, Government has successfully bid out nearly 1.4 lakh sq. km for exploration and production. Seven  blocks awarded today under OALP IV to ONGC have resource potential of approx. 33 billion bbls of oil and oil equivalent gas.”

Speaking about reforms in the hydrocarbon sector, Shri Pradhan said, “We have shifted our focus from revenue to production maximisation and have adopted the path of continuous reform.” He said, “Technology infusion in E& P activities has seen tremendous progress in recent times. Our oil and gas companies are adopting digitisation, new technologies for augmenting production and growth.” Speaking about investments in energy sector, he added, “Energy sector will witness huge investments in coming years. Government has recently released the report of the task force on National Infrastructure Pipeline for 2019-25 which lays down a roadmap for 102 lakh crore rupees worth of investments. Energy sector will comprise about 24% of the projected capital expenditure in infrastructure. “

The four OALP Bid Rounds, conducted till date have been a success, with total of 94 blocks awarded covering an area of 1,36,790 Sq. Km to leading E&P companies. The operators of these blocks have since then initiated petroleum exploration activities or are in final stages of obtaining Petroleum Exploration Licenses (PELs). 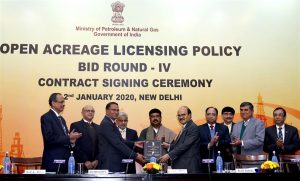 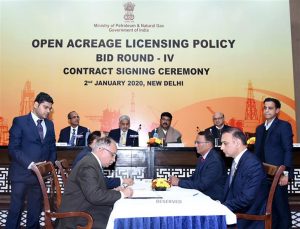 With the successful roll out of the HELP/OALP regime, based on the world-class National Data Repository (NDR), the Government has achieved massive enhancement of exploration acreage in India. The exploration acreage which stood at approximately 80,000 sq. km. in 2019 from earlier regimes has now been enhanced to approx. 2,15,000 sq. km. after 4 rounds of OALP. The cumulative exploratory work commitment after the 4 rounds of OALP comprise 29,270 LKM of 2D Seismic Survey, 43,272 sq. km of 3D Seismic Survey, 369 Exploratory Wells and 290 Core Analysis to establish Shale Resources. This will generate an investment of approx. US$ 2.35 billion over next 3 to 4 years in exploratory work alone.

The 5th cycle of submitting Expressions of Interest (EoIs) closed on 30th November 2019 and currently the 6th cycle of EoI is open till March 31, 2020.

Details of Blocks awarded in OALP-IV