Mumbai :10/6/19  Yuvraj Singh today  announced retirement from international cricket, ending a roller coaster career during which he became the hero of India’s 2011 World Cup triumph and fought a gritty battle with cancer.

The 37-year-old cricketer announced his decision in Mumbai.

The attacking left-hander listed the the 2011 World Cup triumph, being man of the match in the event’s final, getting six sixes in an over against England in the same tournament and his first Test hundred, against Pakistan in Lahore in 2004, as the three most special moments of his career. 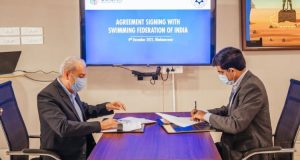 Odisha Sports and Youth Services Department (DSYS) and Swimming Federation of India (SFI) entered into a partnership to develop, promote and expand the Swimming ecosystem