Bhubaneswar:29/1/19:Odia drama BAXI JAGABANDHU will be staged in upcoming  20th Bharat Rang Mahotsav 2019 to be held in Newdelhi  from february, ,2019.Here is details about the play.

The Great Paika Rebellion of 1817 happened under the leadership of Buxi Jagabandhu, the commander of the forces of the King of Khordha. Colonel Harkot, who was in-charge of the British East India Company in 1803, was planning to capture Odisha, which was strategically placed between Bengal and Madras, after the British had conquered Bengal in the North and Madras in the South. To achieve this, the first target was to make a treaty with Deogan and slowly bring Odisha under the Company’s control. Colonel’s scheme was to conquer Puri via Chilika Lake. Mukunda Dev II was the then king of Odisha. Colonel managed to get Maludar Fateh Mahammad into his fold and entered Odisha. Subsequently, they imprisoned King Mukunda Dev II. The Minister of Mukunda Dev II, Jai Rajguru was brutally killed fighting against the British. In the end, despite Buxi’s perseverance and constant resistance, he was killed by British officer Fletcher and a rumour was spread that a tiger killed Buxi. Fletcher saluted Buxi for his heroism and bravery to protect his motherland.

The play is based on the hero of Paika rebellion, Bidyadhar Bhramarabara Rai. He is popularly known as ‘Buxi Jagabandhu’. With the support of common people, he became the leader of the first rebellion of the Paika (Soldiers of Odisha) against the British Rule. I thought of doing this play, written by Padmashree Manoranjan Das, on the occasion of 200th anniversary of Paika rebellion, to encourage the youth of Odisha by reminding them about Buxi’s heroism, love towards the nation, and the Paika rebellion.

Born on 28th January 1989 in Odisha, Debabrata Pattanayak is a Post Graduate in Drama (Direction) from Utkal University of Culture, Odisha. He has acted in about 30 Odia plays, written 7 plays and designed-directed 25 plays till now. Mr Pattanayak formed his own theatre group Dynamic Platform in 2015. He has undergone serious training under Rudra Prasad Sengupta, Satyabrat Rout and Subodh Patnaik. He has been recognised as a regular practitioner of contemporary theatre in Odisha. Presently he is serving as an Art Education Instructor (Theatre) in DIET, Puri, Odisha. He has been conducting theatre workshops with children and university students in different educational institutions.

Being established as a contemporary theatre group in 2015, Dynamic Platform, has been producing plays since 2013. It was started with a mission to encourage the creative young talent by using theatre as a tool with systematic practice and training. The group has produced many significant plays and has participated in state as well as national theatre festivals such as International Peoples’ Theatre Festival of Natya Chetana, Panchamveda, and Arohan. The group also organises children’s theatre workshops to promote their creative potential and expression. 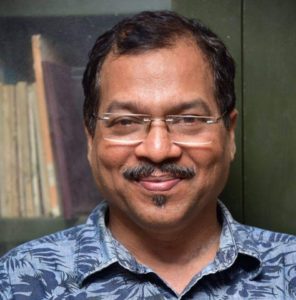 A young man and woman flee their homes to escape from the problems, they might have faced there. They are unknown to each other. But they chance to meet at a place quite accidentally. The young man is ‘Raja’ and young lady is ‘Rani’. It may not be their real names, but assumed ones only. Upon conversing they gather that their aims are similar, which is to escape from an alienating world.  During the course of discussing their past they enact their childhood, frustrating youth and all the other tit-bits of their life.  Finally they discover running from the problems is futile. So what should they do? They must return.

To experiment with exemplary contemporary feelings attract me to visualize this play. I want to convince my audience to think on the subject in a serious note. The characters focus upon new types of performance to maintain quality and flow of work. Locally flavored music employed by theatre artists imbues it with passionate drama. The sets and props are imbued as designs to create the socio – cultural ambience. I have endeavored to base the presentation on contemporary feelings. I wanted to make sure that the spectators are amused because through this medium their dreams are realized and made real.

Abhinna  Routray, is distinguished for his unique experimental directorial language. He tries to fill the gaps due to absence of new concepts in drama to render them relatable to modern audiences. He has acted in 15 stage plays, directed and designed 22 Odia plays, famous ones among these are: Andha Yug, Adhe Adhure, Kanyadaan, Ek Gadhe Ki Atma Katha, Kamala. He has time and again proved his directorial prowess and been recognized and awarded by Pancha Patta Mali Natya Mahotsav, Swast Jhankar Theatre Festival. He recently completed his tenure as general secretary of Odisha Natya Sangha .

Dr. Bijay Mishra (b. 16 July 1936) is a dramatist, lyricist and screenwriter from Odisha. He is a recipient of the State Sahitya Academy Award (1968, 1988), Konark Samman (1994) as well as the Kendra Sangeet Natak Akademi Award and the Odisha Sahitya Akademi Award.

Starting as a playwright with his first play Janani staged in 1960, Cuttack. Known for pioneering work in modern theatre movement some of his other famous plays are: Duiti Surya Dagdha Fula Ku Nei, Tata Niranjan, Janta, Last Train, Asanta Graha.

His play Tata Niranjana is translated in Hindi, Nepali, Kannada and other Indian languages. It got him a national award from All India Radio.

Our group Jeevan Rekha is at the fore-front of theatre renaissance in the state.  Founded in 2002 by like- minded people committed to art, culture and social development, Jeevan Rekha has been steadily moving ahead on its path of choice, covering mile-stones and including into its fold a number a prominent artist, theatre persons, writers, scholars and media persons. Free from ideological prejudices and the compulsions of political correctness, Jeevan Rekha has spearheaded a theatre movement in Odisha, joined with many later. Our mission is an upkeep of our cherished cultural legacy and heritage, to be inherited by our future generation. In resonance with the objective we have staged a number of popular and admired plays in different parts of Odisha, which can easily be considered landmarks in the world of theatre. 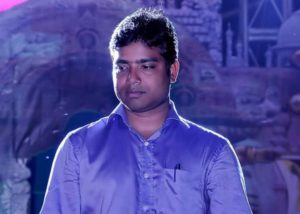 The Bhakti Movement flourished in Eastern India, and the temples provided shelter to the destitute, abandoned children, widows and community dancers. The play talks of a modern day situation where, as time passes, darkness spreads on those glorious days. The priest, failing to receive patronage of the modern generation, is accused of inheriting temple property. The successor, a differently abled and abandoned child once picked up by the temple priest, shoulders the responsibility of the spiritual world. The spiritual world of women and the devadasi tradition are accused of prostitution. The last hope of the destitute suffers major losses in the claws of modernity. The prayers are often interrupted by DJ’s music that profoundly challenges the existence of traditional bhajans and dances. Threatened, abandoned and unprotected, the temple shrine suffers much on all fronts. It becomes a meeting places for junkies who steal temple ornaments for drugs and accuse the priest for the theft. A vicious plan to smuggle a two thousand year old Krishna idol is about to be executed by robbers when the differently abled priest self immolates himself along with the idol, destroying the attempt of plunderers, thereby offering the last ‘rite’ to the lord. The plot is centred on changes and transgressions of human attitude towards religious devotion, and how the new generation responds to devotion and spirituality.

This widely acclaimed story by Mohapatra Nilamani Sahoo was considered for production for its emotional and spiritual values, devotion to God, and of the laudable concept that in modern times too there exists spiritualism and devotion. The play blends folk dance, classical music, culture, rituals and customs of Odisha.

Nalini Nihar Nayak is not only a well-known theatre director of Odia plays but also an actor, designer, and music composer. He earned his Masters and M.Phil in Drama (Direction) from Utkal University of Art and Culture. He is now pursuing Ph.D. in Analytical Practice with Classical Indian Theatre. He has also learnt Chhau dance in Mayurbhanj style. He has received prestigious awards like Ustad Bismillah Khan Yuva Puraskar, Rajiv Gandhi Professional Award, National Youth Award, Konark Samman, Master of Odisha Award, Baisakhi National Excellency Award, Shrestha Natua Samman and more than 120 Government and Non-Government awards. He has acted in about 80 play and directed about 35 plays staged in India, Malaysia, Singapore, Bangladesh etc. Nalini is serving as a student activity officer at National Institute of Technology, Rourkela and is striving hard to encourage the students towards art and culture.

New Quest Repertory made its debut in the year 2003 under the visionary leadership of Nalini Nihar Nayak, with the objective to train young artists in theatre and resurrect the dying art forms of Odisha. It has participated in the theatre festival organised by Odisha Sangeet Natak Academi, Yuva Pratibha Mahostav by Sangeet Natak Academi, New Delhi; Experimental theatre festivals by EZCC, Kolkata; National Youth Festival; Bharat Rang Mahotsav by NSD, National Theatre Festival by Bharat Bhavan, Bhopal; Konark festival and many more across the country, besides theatre festivals organised by government and non-government organisations.