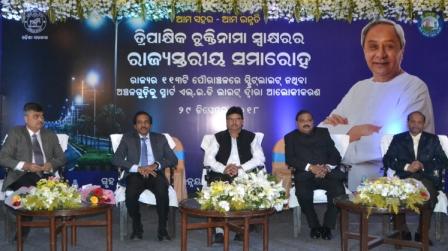 Bhubaneswar:30/12/18: The Odisha government on Saturday signed a tripartite agreement for installation of Smart LED Street Lights in all the 113 urban local bodies (ULBs) in the state.

The agreement was signed in the presence of Housing and Urban Development (H&UD) Minister Niranjan Pujari.

As per the agreement, the areas under the ULBs which are still left out of streetlight coverage will be covered with Smart LED Lights under the Greenfield Smart-LED street light project

Under the project, a total of 61,079 LED bulbs will be installed at an estimated cost of Rs 269.83 crores. The project will be implemented on PPP mode.

The streetlights will be professionally managed and energy efficient Smart LED street lights will be installed in all the uncovered areas of 113 ULBs for an initial period of seven years.

2018-12-29
Editor in chief
Previous: :Pratibha Ray’s JAGYASENI (ODIA) is stepping into its 100th edition
Next: 19 Maoists were killed in encounter while 39 were arrested