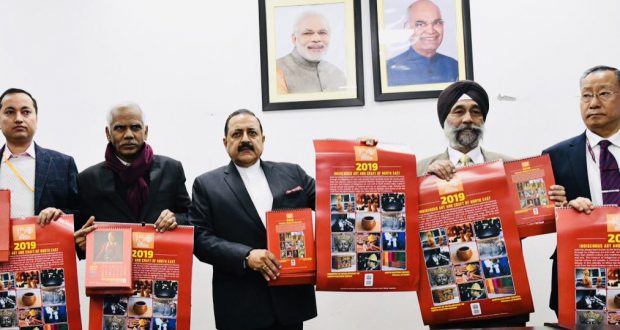 in National December 28, 2018 Comments Off on North east has undergone a revolutionary transformation during the last four years: Dr Jitendra Singh 542 Views

Speaking on the occasion, Dr Jitendra Singh said that in the last four and half years, north east has undergone a revolutionary transformation under the leadership of Prime Minister Shri Narendra Modi. He added that Prime Minister has himself paid several visits to the north eastern region. He added that now the North East region has become a role model for the other states. The Minister said that  recently Government has approved the extension of benefits to Jammu & Kashmir on the line of North Eastern states for industrial promotion, which is a matter of pride.

The Minister also spoke about other initiatives for north east region e.g. first region based NITI forum for north east, North East Special Infrastructure Development Scheme, region based North Eastern Road Sector Development Scheme, first ever airport in Sikkim (Pakyong), North East Venture Fund, amendment in Indian Forest Act where bamboo is no longer a tree, enabling the livelihoods of forest communities, among others. He said that DoNER Ministry has organised various events to promote culture and tourism of north east such as Destination North East series, North East calling etc. Speaking about the infrastructure development, the Minister mentioned about the Bogibeel bridge is a road and rail bridge over the Brahmaputra river in the north eastern Indian state of Assam. He also said that north east is now better connected with the other parts of country.

Among other initiatives during the year, the Union Cabinet has approved repositioning of NEC with Union Home Minister as ex officio Chairman & Minister of State, DoNER as Vice-Chairman. The North East Road Sector Development Scheme (NERSDS) has been extended till March, 2020 with an outlay of Rs.1000 crore.

Click here for major achievements of Ministry of Development of North Eastern Region during 2018.