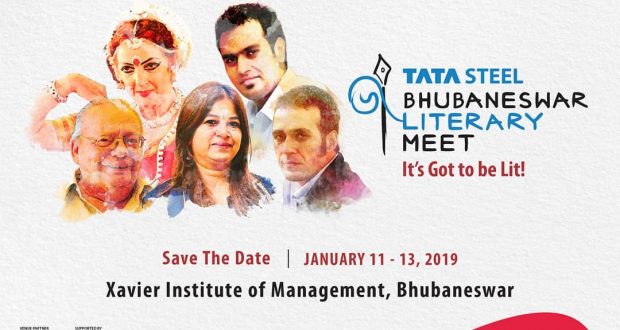 Tata Steel Bhubaneswar Literary Meet is going to be held from 11th,January to13 th ,January,2019

in Literature December 25, 2018 Comments Off on Tata Steel Bhubaneswar Literary Meet is going to be held from 11th,January to13 th ,January,2019 937 Views

Bhubaneswar:25/12/18:From Jaydev’s Gita Govinda, to Sarala Das’ Mahabharata, to the path-breaking works of poets such as Sitakant Mahapatra and Ramakanta Rath, and fiction writers such as Prativa Ray in the modern era, Odisha is famed for its literary heritage.

It is to celebrate this immense richness that the Tata Steel Bhubaneswar Literary Meet (TSBLM) was launched in 2016. The event pays homage to the best of Odisha literature, while also going beyond the confines of the purely literary and bringing on board various pursuits such as theatre, art, dance, music, cinema, journalism, and politics, all of which directly or indirectly affect literature.In upcoming year Tata Steel Bhubaneswar Literary Meet is going to be held from 11th,January  to13 th ,January,2019 at   Xavier Institute of Management, Bhubaneswar.

2018-12-25
Editor in chief
Previous: Jindal Steel and Power Ltd has been conferred with the fifth CSR Impact Award in the environment category
Next: Millennium Soft-tech unveils Fully Integrated POS Solution to Retailers