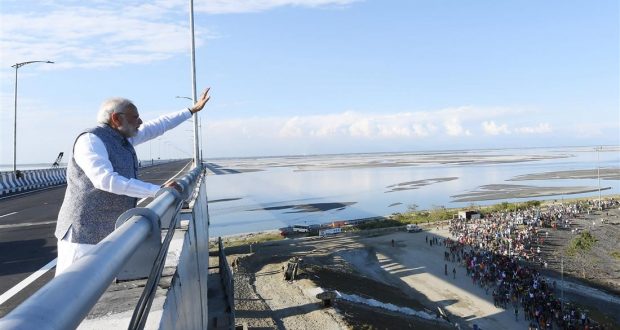 in National December 25, 2018 Comments Off on PM dedicates Bogibeel bridge to the nation 833 Views

Assam:25/12/18; The Prime Minister Shri Narendra Modi, today dedicated the Bogibeel bridge in Assam, to the nation. The bridge, which spans the River Brahmaputra between Dibrugarh and Dhemaji districts of Assam, is of immense economic and strategic significance for the nation. At a massive public meeting in Kareng Chapori, on the northern bank of the Brahmaputra,the Prime Minister also flagged off the first passenger train passing through the bridge.

Speaking on the occasion, the Prime Minister paid homage to the famous Assamese singer Deepali Borthakur, who passed away recently. He also paid homage to many other famous and historical figures from the State, who have brought laurels for the State and the country in various fields. He greeted the people on the occasion of Christmas. He said that today is the birth anniversary of former Prime Minister, Shri Atal Bihari Vajpayee, and is also celebrated as “Sushaasan Divas” or “Good Governance Day”.

The Prime Minister said that for the last four and a half years, the Union Government has pursued the objective of good governance. He said the dedication of the historic Bogibeel rail-cum-road bridge, is a symbol of this objective. He said this bridge is a marvel of engineering and technology, and is of immense strategic significance. He said this bridge reduces distances between Assam and Arunachal Pradesh. He said it would greatly enhance “ease of living” in this region. The Prime Minister said that this bridge had been a dream for the people of this region for generations, and is now a reality. He said that Dibrugarh is an important centre of healthcare, education and commerce in the region, and the people living north of the Brahmaputra, can now access this city, more conveniently.

The Prime Minister appreciated all those involved in the construction of the bridge.

He recalled that in May 2017, he had also dedicated the country’s longest road bridge, the Bhupen Hazarika Bridge at Sadia in Assam, to the nation.

2018-12-25
Editor in chief
Previous: Odia film Love Express going to be hit the theater on 28th December
Next: Jindal Steel and Power Ltd has been conferred with the fifth CSR Impact Award in the environment category