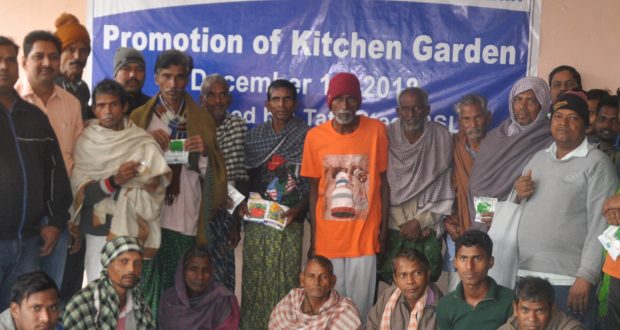 in District Diary December 24, 2018 Comments Off on Tata Steel BSL has started a pilot project on kitchen garden 833 Views

Meramandali, December 24, 2018: Tata Steel BSL, formerly known as Bhushan Steel Limited,  has started a pilot project on kitchen garden in two villages near its plant at Kantabani in Hindol block of Dhenkanal district. Launched as part of the Corporate Social Responsibility initiatives of the steel major, it has evoked good response from the farmers.

The project was inaugurated by Shri Pankaj Pradhan, Sarpanch of Kusupanga Grama Panchayat, in presence of Shri Ashutosh Das, Senior Manager, CSR and other officials of Tata Steel BSL  and villagers.

Thirty two farmers from both the villages – Kusupanga and Kurunti  under Kusupanga Panchayat were provided vegetable seeds for backyard kitchen garden. The farmers expressed keenness to grow vegetable on a commercial scale. They will be monitored by the CSR team of the company. Along with ensuring an inexpensive, regular and handy supply of fresh vegetables which are basic to nutrition, the kitchen garden will also provide an additional source of income to the families.

Commending Tata Steel BSL for the initiative Shri Pankaj Pradhan said, “we are happy as many of the villagers can sustain themselves through these kinds of initiatives.”

Earlier in November Tata Steel BSL had conducted a two-day long training camp on vegetable cultivation and mushroom farming for farmers from Kurunti and Kusupanga villages under the guidance of Shri Bhagawan Das, Deputy Director, Horticulture, Dhenkanal district and Shri Ajay Prusti, noted entrepreneur on mushroom farming. If proved successful similar kitchen garden projects will be taken up in other nearby villages.

With an aim to promote inclusive growth in the area, since the takeover of the then Bhushan Steel in May 2018, Tata Steel has started  work on two model schools at a cost of Rs 10 crore in Dhenkanal district. Besides a mobile primary health care unit is serving around 11,000 villagers around the plant while a 7km long cement concrete road is being constructed to connect 8 villages to NH 55 at a cost of Rs 6.11 crores.

Tata Steel BSL Limited (BSL), formerly known as Bhushan Steel Limited ( BSL), isIndia’s fifth largest flat steel producing company with an existing steel production capacity of 5.6 million tonnes per annum (MTPA) as on March 31, 2018. It has India’s largest Cold Rolled Steel Plant and is one of the largest suppliers of automotive grade and high carbon special steel in the country. BSL recorded a gross revenue of US $ 2675.79 Million (INR 17,404 crore) in FY18. The organisation is spread across India with an employee base of over 5,600. On May 18, 2018, the then BSL was acquired by Tata Steel Limited through its wholly-owned subsidiary Bamnipal Steel Limited.  Tata Steel BSL was felicitated with several awards including  Global Safety Award 2016  by Energy and Environment Foundation for outstanding achievement in implementing Prime Minister of India’s Swachha Bharat Mission, Environment Excellence Award 2016 from Indian Chamber of Commerce (ICC) Kolkata for its exemplary environment performance, Appreciation award for pollution control for 2016 by Odisha State Pollution Control Board, Ispat Suraksha Puraskar 2018 (for the performance year 2016-17) organized by the ‘Joint Committee on Safety, Health & Environment in the Steel Industry’ (JCSSI).

2018-12-24
Editor in chief
Previous: Esplanade Mall has granted the people of Bhubaneswar their most popular wish as the biggest multiplex
Next: PM releases commemorative stamp and coin on Paika Rebellion; dedicates IIT Bhubaneswar campus to the nation